Star Trek: The Next Generation: "Symbiosis" 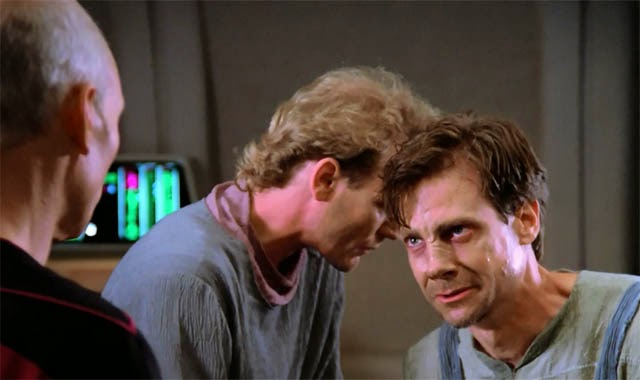 'Tonight, on a very special Star Trek: The Next Generation...'

I am going to state right from the outset that this episode of Star Trek: The Next Generation does not get my tick of approval. It's not because it's a pretty tedious and simplistic story (it is). It's not because there's some dodgy acting inside (there is). It's because halfway through the episode the writers make Wesley Crusher and Tasha Yar have positively the worst conversation about drug addiction that I have ever seen. It's the classic 1980s Nancy Reagan-approved 'just say no' speech, which in order for it to be delivered as written required Wil Wheaton and Denise Crosby to portray their characters as naive, simpering morons.

So this is Star Trek: The Next Generation's attempt at a drug addiction allegory, with two alien cultures - one addicted to a medication that they don't really need, and the other purposefully selling them the medication with the full knowledge that it's unnecessary. On the surface it's not a bad concept, but in practice it's an absolute disaster.

The problem is this: the Enterprise rescues four people from a spaceship about to explode. Two of them are addicted to the medication. The other two are selling it. Dr Crusher works out that there's no need for the medication, and Picard insists that due to Starfleet's feted 'prime directive' he can't tell the addicts the truth about what they're taking.

That's rubbish. It's idiotic, and it's insulting to the characters and more importantly the audience. The prime directive is a rule that gets thrown around a lot in Star Trek, and basically dictates that Starfleet officers can't interfere with the development of less advanced civilizations. Given that the civilizations they are dealing with here have interplanetary travel and are familiar with alien species and transport technology, the rule simply doesn't apply. The problem for the writers is that if the rule doesn't apply, then they don't have a conflict. It's the idiot ball again: the characters have to act in ridiculous and stupid ways in order for the plot to work, rather than the plot developing organically from the characters.

It is nice to see Merritt Butrick return to the franchise, since he's a great actor and he does a lot of good stuff here with very little with which to start. He famously played James Kirk's son David Marcus in The Wrath of Khan and The Search for Spock. It's a shame they didn't find him a better episode to appear in, since he died less than a year later.

This episode is awful. We've still only got seven enjoyable episodes in this season, and we're 21 episodes through. That's a score of 33%, and we've only got four more episodes to go. The absolute best score that Season 1 can get at this stage is 44%, so if anyone was wondering which was worse - The Next Generation's first year or Babylon 5's first year - by my reckoning The Next Generation narrowly wins that fight.
Posted by Grant at 11:42 AM