Star Trek: The Next Generation: "Haven" 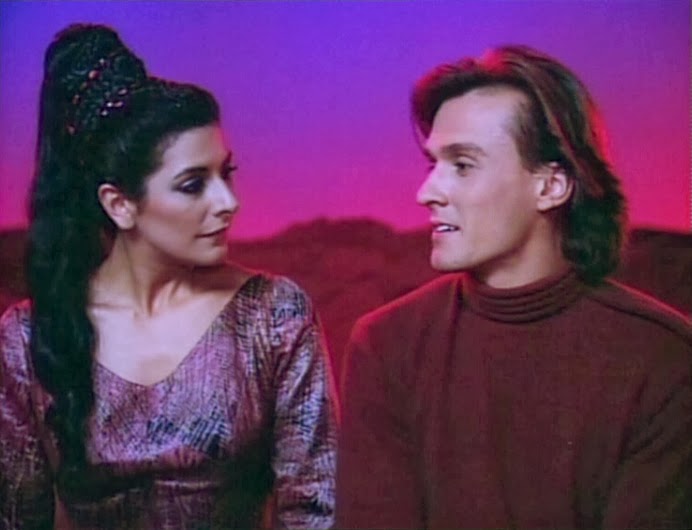 So, what happens in "Haven"? News arrives that Deanna Troi's pre-arranged fiancee is arriving to marry her on the planet Haven. The in-laws don't get along. Riker is upset that his ex-girlfriend is getting married. Troi is upset that she is getting married. Everyone gets upset with Troi's overbearing mother. A starship that may be carrying a virulent plague is on an approach vector for Haven. Armin Shimerman makes a cameo appearance as a box. All sensible viewers either cry themselves to sleep or run a mile.

I think how much you're going to enjoy "Haven" will ride or fall based on how much you enjoy Majel Barrett as the brash, over-confident and effortlessly rude Lwaxana Troi. I hate the character: I've never found her funny, groaned every time I saw her name in the guest credits and usually make a point of not rewatching any of the episodes to feature her. I think she's one of those characters where it's clear that the entertainment is levelled at the actors and the writers, rather than the audience: she looks like amazing fun to write for and perform, but absolutely dreadful to sit through for 42 minutes.

This episode is based around a dreadfully sexist premise, in which a free-minded woman in the 24th century is expected to marry someone she's never met in an arranged marriage - and meekly agrees to go through with it. Deanna is not done any favours by this script, which actively writes her from a weak position and doesn't really allow her the opportunity to assert herself. In the end the wedding doesn't go ahead not because she wants to be in charge of her own life but because her fiancee has met someone else: a woman who lives on the plague ship and with whom he's been sharing psychic contact for some years. I just re-read that last sentence and only then did I fully appreciate just how dire the script to this episode actually is.

The worst part is that the arranged marriage that we can work out is never going to go ahead from the pre-credits sequence doesn't actually make any sense. Neither family appears to like each other. One side is Betazoid semi-royalty with no interest in humans. The other is a family of doctors from Earth with nothing to really gain from being married into alien aristocracy. Why on Earth are they doing this?

One thing the episode should  bring to the table is some character development for Deanna and Riker. We learned back in "Encounter at Farpoint" that they used to be lovers, and certainly he's very upset that she's getting married. Sadly what scenes Marina Sirtis and Jonathan Frakes get are positively dreadful: what's particularly weird is how she reveals they broke up because she couldn't stand in the way of his wanting to be a starship captain. We learn a few episodes from now that he turned down his own command to work on the Enterprise, and it takes seven seasons and four films for him to finally become a captain. This makes it a really strange reason for Deanna to break up with him. Perhaps she wasn't paying attention.

There are a few highlights. Carel Struycken is delightful as Mr Homm, Lwaxana Troi's mostly silent butler/servant. Plus there's... okay, there's one highlight, and Carel Struycken standing in the background looking weird is hardly enough justification to watch the entire unintended disaster unfold. Unless you're writing a blog about it, of course.