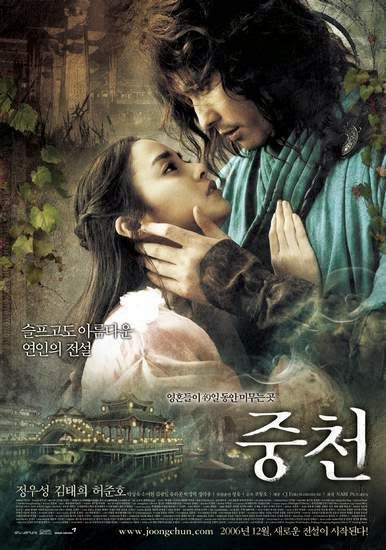 Originality may take a back seat to the visuals in The Restless, but when they're visuals as pretty as these it's sometimes difficult to mind that much.

Yi-gwak (Jeong Woo-seong) is a demon hunter on the run from the corrupt authorities in ancient Korea. A group of villagers slip him a sleeping potion in an attempt to capture him, and claim a much-needed reward. Yi-gwak does escape their trap, but falls into a deep sleep. When he awakes, he isn't in Korea at all, but rather the supernatural world of Midheaven - a place where the souls of the dead wait before they are reincarnated. There he is reunited with two people from his past: Yon-hwa (Kim Tae-hee), the love of his life, and Ban-chu (Heo Joon-ho), his former general and mentor. The problem is that the former has no memory of who she was, and the latter is leading a revolt in Midheaven to lead an army of souls into the material world.

Plotwise, The Restless is fairly run of the mill stuff. The heroes act like heroes, the villains like villains, and they chase each other across the wilderness in a series of well choreographed, over-the-top sword and martial arts fights. Visually, however, the film is a marvel. South Korea has proved itself remarkably adept at creating beautiful cinema in recent years, and The Restless is one of the most visually stunning works that I've seen. Even character deaths, where souls burn and collapse into ash, are rendered with a deliberate sense of beauty. The film is a riot of computer-generated effects, but like the best of Hollywood's effects-driven blockbusters they are presented with integrity and help generate a uniform fantasy world. It feels exactly like the kind of constructed fantasy world that the Pang brothers' The Storm Warriors desperately strived to achieve - only here it is created so effectively that it seems effortless. There is no great sense of the filmmakers having created Midheaven - there's simply the sense of being there.

Jeong Woo-seong (The Good, the Bad and the Weird, Reign of Assassins) is an unexpectedly sensitive lead as Yi-gwak. He manages to impress as a master swordsman and action hero, yet in the film's more romantic or character-based moments he manages to present depth and tone as well. South Korean cinema is notoriously prone to melodrama, and there's plenty of it here, but I think Jeong does a great job of pushing past the melodramatics to find some truth underneath. Less impressive is TV star Kim Tae-hee as So-hwa, the Midheaven protector who may be the soul of Yi-gwak's dead love Yon-hwa. Part of the problem is the script: while it regularly posits So-hwa as a sword-weilding action heroine, more often than not she exits an action scene running for her life, or waiting for Yi-gwak to defend her. It smacks of a lost opportunity, and I think there was a far more interesting character to be presented than the one the filmmakers selected. The other problem is simply Kim's performance - she seems a litle flat and wooden opposite Jeong Woo-seong.

Overall The Restless is a fabulous fantasy film, rich in visuals and presented with plenty of imagination. While its story may hold few surprises, the journey itself is one well worth taking - particularly for fans of swordplay and fantasy.

This review was originally published on the Eiga: Asian Cinema website.
Posted by Grant at 8:56 AM