Star Trek: The Next Generation: "Coming of Age" 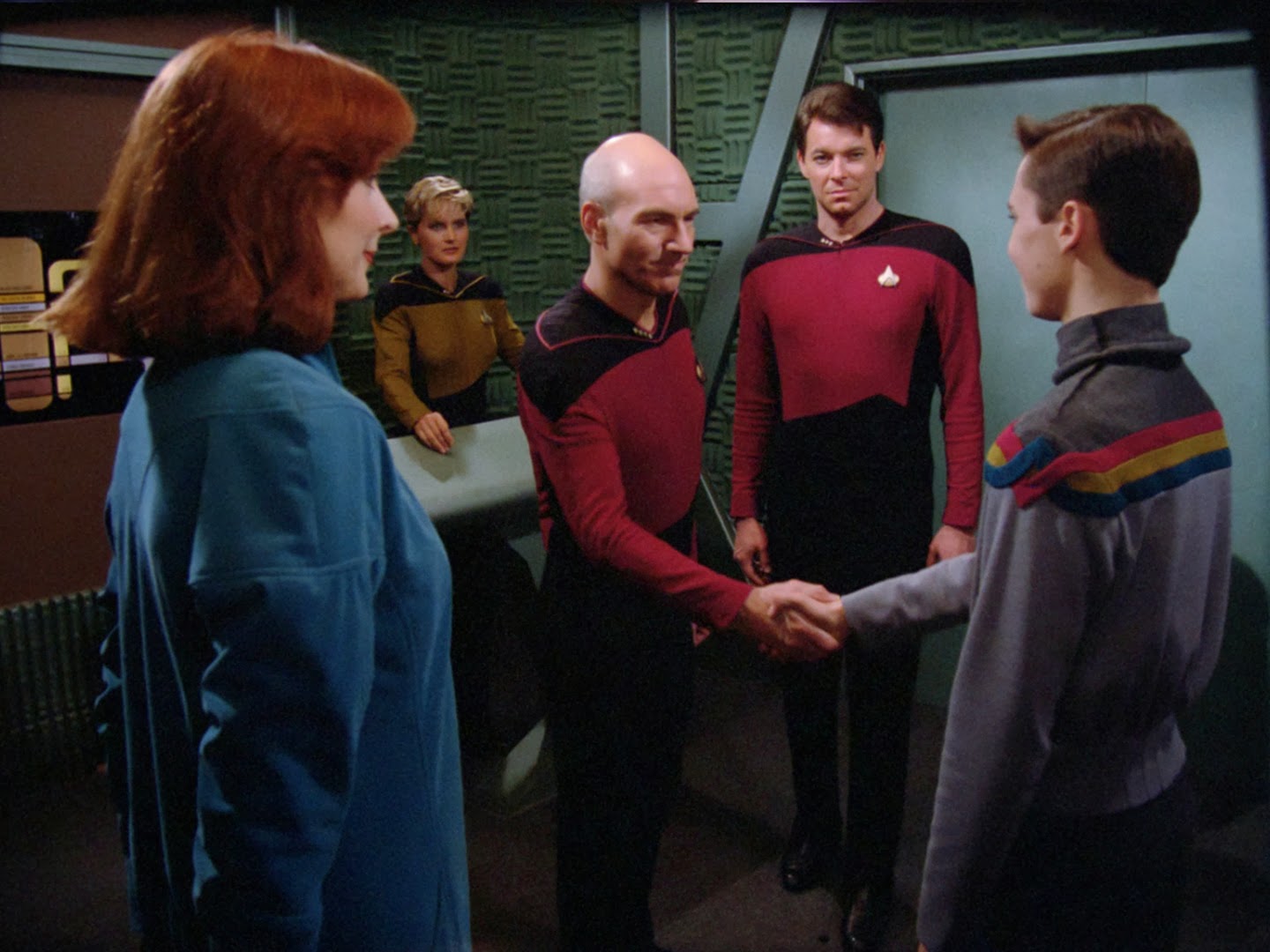 In "Coming of Age", Wesley Crusher undertakes the Starfleet Academy entrance examination, while Captain Picard finds himself under interrogation for his past actions by Admiral Gregory Quinn and his obnoxious assistant Lieutenant Remmick.

I got my hopes up after two half-decent episodes in a row. I figured maybe the kinks in the series had finally been ironed out and it might be... well not straight sailing, because I know for a fact the series doesn't settle down until its third season. I did, however, hope that the worst was behind me.

Sadly "Coming of Age" proves this is not to be the case. It's an episode divided into two halves. In the first half, Wesley enters into what has to be the most bizarre college examination ever devised. Five students are put through a rigorous set of scientific tests, followed by a strange role-play exercise where they must 'face their fears'. At the end of the process, only the highest-ranked student will progress. This seems particularly bizarre: what if two or three of the candidates excel themselves? Does Starfleet only want one of them? Given the rapidity with which young ensigns tend to get killed in the Star Trek universe, you would think Starfleet was falling over itself to get as many cadets as possible. The tests also imply that every Starfleet officer needs to be some kind of scientific genius engineer.

At any rate, despite Wil Wheaton's best efforts (he really does do his best with a horrifying part), this whole plot thread is as annoying as hell. Who will get to go to Starfleet Academy? Clearly not Wesley, since he's a regular cast member for the season, so it's going to be one of the one-off characters we simply don't care about. Since we're not given the chance to know any of his competitors, there's little point in caring. Or watching. On top of that for goodness sake they need to get Wesley out of that grey sweater with the primary coloured piping.

At the same time the Enterprise crew get their hackles up being interrogated by Remmick about Picard's actions. It's all a horrible bundle of cliches, leading up to Admiral Quinn revealing there's a mysterious conspiracy within Starfleet, and offering Picard the position of Head of Starfleet Academy. Will Picard take the job? Let's think for a moment.

No really, take your time.

Two cliche-ridden storylines with sloppy and dull dialogue, ordinary guest performers and conclusions that are foregone as soon as they're on the horizon. "Coming of Age" is a bit of a stinker. Six good episodes out of 18? That's 33%.
Posted by Grant at 10:10 AM