Star Trek: The Next Generation: "Hide and Q" 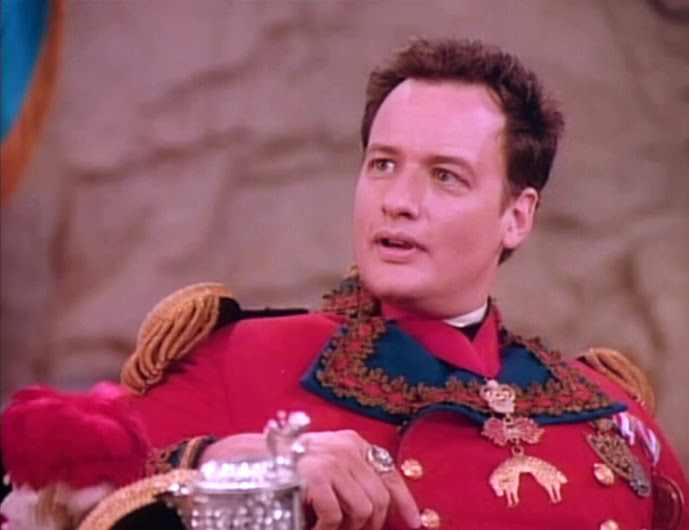 The USS Enterprise is once again intercepted by Q, the all-powerful inter-dimensional alien who caused so much trouble back at Farpoint Station. This time he has arrived with a test for the Enterprise crew, as well as an unexpected offer for Commander Riker.

Q's return marks a fairly massive shift in the tone of the character. In "Encounter at Farpoint" he was presented as someone quite threatening, whereas here (and hereon in) he becomes more of a jovial trickster character. It's certainly a transition that makes the character much more enjoyable to watch. Sadly the episode as a whole is a mess: the structure is clunky, as if two separate episodes have been crunched together at high speed, and characterisation and depth is abandoned in favour of a tedious morality play.

It's essentially an episode of two halves. In the first half, Riker and an away team are magically transported by Q to an alien planet where they play a war game against strange aliens dressed in Napoleonic-era uniforms. When Worf and Wesley are killed in action, Q grants Riker the powers of the Q Continuum, allowing the commander to bring his comrades back to life. This kicks off the episode's second half, in which Riker struggles with his newfound godly powers.

While some aspects are rather entertaining - John de Lancie is very good as Q - others are downright irritating. The climactic scene in which Riker grants each member of the bridge crew a wish, only to have them nobly refuse it, is extremely tedious and simplistic. The cast look visibly embarrassed performing it. Star Trek has produced some outstanding episodes about humans given enormous godlike powers - "Charlie X" and "Where No Man Has Gone Before" both spring to mind immediately - and it's a shame that "Hide and Q" doesn't come close to those earlier takes on the material.

So it's a no for this episode, which leaves Season 1 with only three good episodes out of nine - or 33%.
Posted by Grant at 9:27 AM