Star Trek: The Next Generation: "The Arsenal of Freedom" 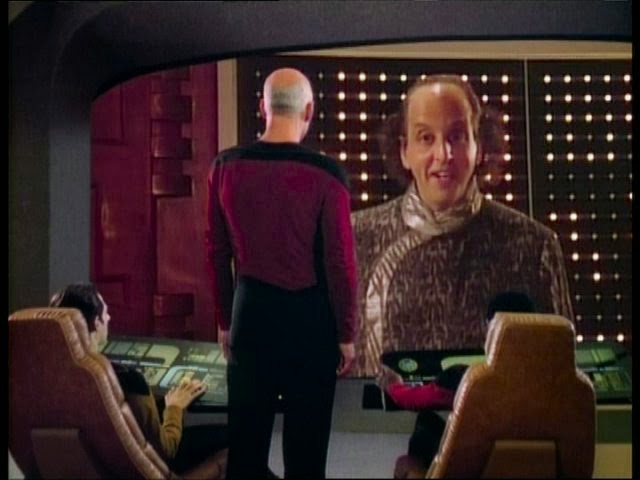 The Enterprise arrives at the planet Minos in search of the USS Drake, which has gone missing. When an away team beams down to the surface, they discover that Minos is the site of a long-dead civilization of arms merchants, and the automated systems are intent on giving them a lethal demonstration.

Like pretty much all of the watchable episodes of Season 1 "The Arsenal of Freedom" is awkward, a bit scrappy and quite often cringe-worthy, but its heart is in the right place and it does achieve a relatively good amount of entertainment. It's production values let it down quite badly - a standing set rarely convinces as an alien jungle - but it has some nice character moments for Picard, Dr Crusher and La Forge and a small guest appearance by the late, great Vincent Shiavelli.

Much of this episode feels like an episode of the original Star Trek, and it's easy to imagine William Shatner and Leonard Nimoy running around a similarly unconvincing jungle taking pot-shots at little floating weapons platforms. This is a vibe I have been getting from a lot of The Next Generation's first season: it's a series that doesn't actually know what it wants to be yet. All it does know is how to be Star Trek, and that's a style of television that's woefully out of date for 1988 (when this episode was initially broadcast). It may be sacrelige for some Star Trek enthusiasts, but Gene Roddenberry was never a particularly strong producer: his work on the original series was propped up to a large extent by Dorothy Fontana and Gene Coon. Left to his own devices on The Next Generation and he simply didn't have the creativity or innovative streak to make something worthwhile - and to an extent the series isn't worthwhile until it starts to be guided by Michael Piller from Season 3. Paramount clearly knew this was going to be a problem, since when they went looking for an executive producer to create The Next Generation Roddenberry was their third choice. He only scored the gig when Harve Bennett and Leonard Nimoy separately turned Paramount down.
Picard and Dr Crusher get some nice character development time when they fall into a disused control room, but sadly Yar and Data get wasted up on the surface with a repetitive storyline involving hiding behind rocks and shooting little floating robots. It's no wonder that Denise Crosby (Yar) bargained her way out of the series - she's been given nothing to do for 19 episodes now.

Up in orbit, La Forge (LeVar Burton) struggles with the responsibility of command when the Chief Engineer (who's changed again - I think that makes four separate engineers in the Enterprise's first year in service) challenges his authority. It's awkward, two-dimensional stuff, but it does work to a certain extent.

Actually that's the episode in a nutshell: it does work to a certain extent. Just not, you know, enough of an extent. That's 20 episodes in, and only seven have been good: 35%.
Posted by Grant at 8:56 AM