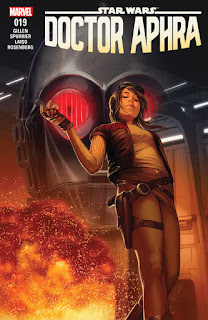 Doctor Aphra is the best Star Wars comic on the market today. It towers over Poe Dameron, vaults beyond Darth Vader, and even tops the regular Star Wars book. It does this because it smartly follows its own protagonist: Aphra only exists in the comic books, and so we don't know her future. We read Darth Vader knowing he will one day die over Endor; we have no idea what fate has in store for Aphra.

This book gets to use Star Wars' toys without also using its constraints. It can play with convention, and throw up all manner of surprising and inventive situations. It can also be wonderfully and bleakly funny while doing it. It also gifts Star Wars with what I believe is its first canonically non-heterosexual protagonist.

This issue brings the "Remastered" storyline to a wonderfully unexpected and satisfying conclusion. It's not only funny but gripping; there is a real joy is seeing how Aphra gets her way out of her latest life-threatening predicament. With luck this book will continue for a long, long time. (4/5)

Under the cut: reviews of Doom Patrol, Mera: Queen of Atlantis, and Sacred Creatures.

Every new version of Doom Patrol seems 'doomed' (sorry) to failure. This marks the end of another volume, not due to poor sales this time but because the creative team of Gerard Way and Nick Derington simply couldn't keep to a regular schedule. The book has felt like a mess as a result: a complex, surreal narrative isn't paid any favours if it keeps getting delayed. Re-read in the future at once it may be a more satisfying read than it has been. It ends pointing readers to Milk Wars - a miniseries completed a few months back. Not a bang, then, but a whimper. (2/5)

With Atlantis in trouble, Mera may have to team up with one of her arch-enemies: Orm the Ocean Master. This tie-in to the ongoing Aquaman civil war storyline is solid but unremarkable. It tells a broadly entertaining story, but never feels necessary about it. Its artwork is enjoyable without standing out. The scripting is functional without making an impression. It is great to see Mera finally get a book of her own; I just wish it was a slightly better book. (3/5)


Image. Story and art by Pablo Raimondi and Klaus Janson.

The lengthy issues really help Sacred Creatures; even if it suffers the delays that can cripple shorter books, the length gives each issue space to re-assert the story with readers. This installment gets us to the end of the first story arc, and firms up the story going forwards. It does a tremendous job of tying everything together for the long haul. The flashback sequences also help to build back story and character. This is a book I like that's right on the verge of becoming a book I love. (4/5)
Posted by Grant at 11:02 AM