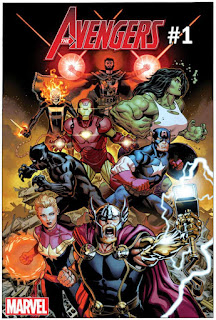 In Marvel's case the storyline comes from the new creative team of writer Jason Aaron and artist Ed McGuinness. I am an enormous fan of the former, but somewhat on the fence with the latter. That pretty much fits with the issue at hand: Waid's script manages to introduce both the new Avengers line-up and the threat to the Earth, as well as cover all the various continuity elements and backgrounds in a fairly neat and non-frustrating way. McGuinness' artwork feels surprisingly weak an inconsistent; either Tony Stark is a giant or he drinks frighteningly tiny cocktails. The colouring feels a little off in places too (pink ships?), and together it makes this first issue feel a little bit rushed.

Solid writing wins the day - as does a spectacularly silly opening scene involving the Avengers of 1,000,000 BCE. Hopefully the art settles a little with issue #2, but in terms of story and characters this new volume of The Avengers is off to a pretty solid beginning. (4/5)

Under the cut: reviews of Action Comics, Green Arrow, Scales & Scoundrels, and Star Trek: The Next Generation.

This unexpected one-shot is a strange affair. It's dominated by a particularly good done-in-one story about a mysterious villain targeting Lois Lane after discovering her connection to Superman. Then there are two short back-ups, neither of which make a tremendous impression. One suspects DC commissioned a little too much material for Action Comics #1,000, and this is the tail end of that material. The lead story by Jurgens and Conrad is excellent. The rest? It kind of just sits there, not quite good enough to justify themselves but adding to the cover price all the same. (3/5)

Green Arrow teams up with a group of young makeshift superheroes to bring down a North African terrorist. The biggest surprise about this storyline is its brevity. When most superhero narratives continue to stretch out to trade-friendly six-part epics, this one wraps up neatly at the second installment. Marcio Takara's artwork is a distinct shift from Juan Ferreyra's rich, colourful work on earlier issues. I wasn't entirely sold on the first issue with the new creative team, but this second issue really does nail it. (4/5)

Once again Scales & Scoundrels delivers a phenomenal one-shot, one that should be a must-read for all comic book readers. This is a tremendous book, one that matches charming characters and artwork with a hidden level of depth. This issue eschews dialogue for the most part to tell a story entirely through the characters' actions. There's a boy on a beach, and a treasure beneath the sea, and an unusual encounter for Luvander. Galaad's art may look simplistic, but it's issues like this that show off just how strong that artwork really is. (5/5)

Star Trek: The Next Generation: Through the Mirror #1

I have never understood the fascination with Star Trek's mirror universe. It was a cute kind of a thing back in the 1960s, with evil versions of the regular cast and an alternate Spock with a goatee. It was also cute to see Deep Space Nine revisit it; but then they revisited in annually until the concept was thoroughly driven into the ground. Then Enterprise covered it, and last year Discovery covered it, and the whole idea is so thoroughly worn out that I simply can't bring myself to care. So of course IDW are going to produce a Next Generation miniseries based around yet another crossover to the god-damned mirror universe. It makes one despair. Thankfully the issue itself is solidly written, and features excellent artwork by Marcus To (Joyride). I wish we could just get a straight-forward monthly Next Generation book, without having to wait for these occasional novelty miniseries (Doctor Who crossovers, mirror universe sequels, and the like). Marcus To would be a great fit for it as well. (3/5)
Posted by Grant at 5:00 PM