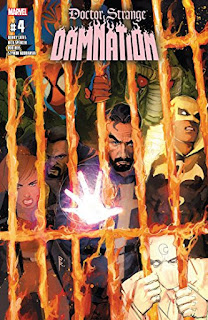 Marvel regularly struggle with their event miniseries - that's certainly been my feeling anyway. They always seem to run too long, get too many tie-ins, don't make a lot of sense, force characters to act in ridiculous ways to make the plot work, and collapse in their climaxes.

That's why Damnation seems to have made such a positive impression on me. It has a strong and easy-to-follow plot, smart twists and turns, a minimum of spin-offs, and a very clever use of a range of second-string characters. Sure its open-ended conclusion points to a forthcoming Midnight Sons series, but at the same time I don't need to wait for that series to get a satisfying conclusion here.

The artwork is strong, the dialogue sparks, and I really cannot exaggerate how well it utilises its broad cast of characters. With Marvel struggling to maintain market share in recent years, events like Damnation are a big step in the right direction. (4/5)

Under the cut: reviews of Batman and the Signal, Doctor Strange, and Saga.

Batman and the Signal #3

The three-issue miniseries is a sadly under-used format in comic books. In comes with a ready built three-act structure, and for relatively simple stories like this one - which introduces Duke Thomas' new superhero identity of the Signal - it's the absolute perfect length. Sadly three issues only amounts to 60 pages of story these days, and that's simply too short to repackage as a trade paperback. Tony Patrick writes up a satisfying climax that both wraps things up and provides hooks for future adventures. Cully Hamner's artwork is just wonderful. This has been a really enjoyable little series. Hopefully Duke gets a sequel miniseries soon (for one thing it could bulk out that trade paperback). (4/5)

This tie-in issue was released simultaneously with Damnation #4, which seems fair enough since the events of the two books run simultaneously anyway. While Wong battles Mephisto in Las Vegas, Strange is in a hell dimension with the souls of the Avengers. The only way out requires making a literal deal with the devil: the demon Dormammu. It's a smart, surprisingly funny wrap-up, one that manages to provide a whole extra angle on the main climax in Damnation (reviewed above). The denouement is particularly superb. (4/5)

Prince Robot and Squire prepare to receive their new identities, as a new arrival threatens to destroy everything for good. There is a great mixture this issue between the peaceful character development stuff and one big plot development that I did not predict and am a little sad to see. That's sad in a "this outstanding writing has made me sad" way, and not a "I am disappointed in the writing" way. The ending is seriously great, in a way that takes a second to realise exactly what has happened. Issue #52 looks set to be great. (4/5)