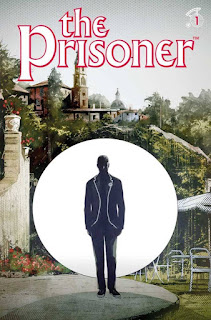 Breen is an MI5 agent on the run after a mission to the Middle East resulted in the disappearance of his partner. The only clue he has to go on is the rumoured espionage organisation known only as "the Village".

The Prisoner is more than 50 years old now, but it remains one of the best television series ever produced. The series starred Patrick McGoohan as the pseudonymous Number Six, a secret agent held prisoner in a highly surreal and isolated village, whose authorities press him incessantly for the reason he resigned from the secret service in the first place. It is such a delicately prepared work that it would be near-impossible to replicate its qualities decades later.

Peter Milligan certainly doesn't manage it, with an ill-advised attempt to give a real-world introduction to the Village, something that simply punctures the entire mystique of the original. There is an overriding feeling that Milligan is trying to make sense of The Prisoner, and that is exactly the wrong thing to do with this sort of property. Colin Lorimer's realistic art and Joana Lafluente's gloomy colours do no favours either. (2/5)

A new storyline kicks in, with Batgirl stopping a domestic violence incident, before getting shot by a strange high-tech weapon. After that, her life gets a bit weird. It's a low-key but broadly entertaining issue, with appealing art by Minkyu Jung and Jose Marzan Jr, and some unxpected ties back to Hope Larson's original "Beyond Burnside" storyline. It does hit a few buttons already pressed in the last volume of Batgirl, but still manages to largely stand on its own. (3/5)

During the siege of Mon Cala, a counter-offensive sends an entire Imperial invasion force to the bottom of the sea - including Darth Vader. The pressures of the deep ocean, however, are no match for the Dark Lord of the Sith. There is something just a little underwhelming about this current story arc: it's enjoyable, but it doesn't feel particularly energetic or original. Still, fans will find plenty to enjoy - not in the least the issues use of several movie characters alongside Vader. (3/5)

James Tynion's climactic and final story arc for Detective Comics brings in Brother Eye at the OMACs, Infinite Crisis-style. It honestly feels like a little too large a story element to work properly, and in some regards this issue struggles under their weight. At the centre of this storyline sits Tim Drake, which really does highlight another problem. DC simply do not seem to know what to do with the character. He was the best of the Robins, until Grant Morrison introduced Damian Wayne and supplanted Tim's role on the team. He does not get to be Robin proper any more, and he has never been given the benefit of a subsequent proper identity: Red Robin simply doesn't cut it. (3/5)

Jim Zub is a master at writing breezy pulp fantasy stories with a lot of jokes in it. It makes him the perfect writer for a Dungeons & Dragon comic book, since the genre is rarely pulpier and the humour really makes the stories entertaining for readers. This issue sees Minsc the Mighty, a remarkably stupid fighter, arrive in town to fight evil - accompanied by his homicidal hamster sidekick Boo (it's that kind of a comic) - only to discover there is a new city hero on the scene. This is light, breezy fun that certainly doesn't require any familiarity with the role-playing game Dean Kotz's artwork has a nice upbeat feel to it as well. (3/5)
Posted by Grant at 12:33 PM