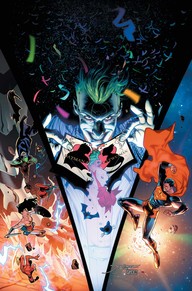 It's time for another periodic soft relaunch for DC Comics. Justice League is getting a new issue #1 in the aftermath of Dark Nights: Metal. Batman and Catwoman are about to get married. Brian Michael Bendis is coming in to overhaul the Superman books. Heralding these changes, and acting as a kind of prologue, is DC's 25c special DC Nation (also, I believe, going for free on Comixology).

The book's divided into three sections. The first, "Your Big Day", sees the Joker waiting at a random man's house for a mail delivery. It is brilliantly written and illustrated, with a Joker that is simultaneously funny and scary in equal measure.

"Office Space" foreshadows Bendis' new Man of Steel miniseries with a new character and a new status quo. Of the three prologues, this feels the weakest. It's obviously too early to say what Man of Steel is like, but this taste feels as if it's changing a little too much of the status quo between recent Superman books and whatever Bendis has planned for the future. "No Justice Prelude" is pretty much an excuse for some nice artwork and colouring, and a preview of the new expanded (and oddly improbable) Justice League.

It's a little odd scoring a three-part prologue; it's effectively like giving a score to an advertisement. All that in mind, it's one must-read little Joker short, plus two easily missable bonus strips. That pretty much leads to a score of (3/5).

Under the cut: reviews of Batman, Exit Stage Left: The Snagglepuss Chronicles, Giant Days, and Spider-Man.

The same good and bad elements in the last issue of Batman continue to apply to this one: Booster Gold tried to give Batman a special wedding present by going back in time and saving his parents. The rippling after-effects have changed history and made Gotham a hellish war-zone. As a dark alternative future it's smartly developed and entertaining. Tony Daniel's artwork is beautiful and detailed. The entire narrative only functions by making Booster Gold ridiculously stupid. That kind of dents the entire storyline out of shape. (3/5)

Snagglepuss is called to testify in the House's anti-communist hearings, while attempts to attack him via his friends end in horrifying tragedy. This issue is an exemplar of why Exit Stage Left has been such an odd comic book. Taking old Hanna Barbera cartoon characters and placing them into the 1950s New York theatre community, and then focusing on anti-communist paranoia and homophobia, is not remotely what you would expect to see with this kind of corporate intellectual property. This issue takes things a big step further, with some plot developments I hadn't imagined DC would publish. It's weird and distinctive, and more importantly it's doing a really good job. (4/5)

Daisy and Esther settle into their new housing arrangements for the new year. The new year is also bringing a new artist - at least temporarily - with Julia Madrigal replacing the regular team of Max Sarin and Liz Fleming. The change of style is initially distracting, but Madrigal definitely has a slightly different take that works on its own merits. I'm pretty sure I still prefer the old team, but if Madrigal continues the book is certainly still in safe hands. The writing is funny this month, but to be honest it's all a bit by-the-numbers: good but not amazing. (3/5)

Brian Michael Bendis created alternate Spider-Man Miles Morales, and now - with his move from Marvel to DC, and after seven years - he writes the character for what might be the last time. It's a really abrupt end: the last issue had Miles in Europe on top of a stolen SHIELD helicarrier fighting his own uncle, but this issue has him waking up hospital having collapsed from a viral infection. It's semi-autobiographical (the same sudden infection happened to Bendis), but it's also a weak and unsatisfying cheat. People come to visit Miles in the hospital, a few dialogue sequences wrap up story elements, but altogether it's a terribly unsatisfying conclusion. Hopefully a new writer will pick up on Miles' adventures soon; after such a popular and well-regarded run, this is a very poor finale. (2/5)
Posted by Grant at 5:21 PM