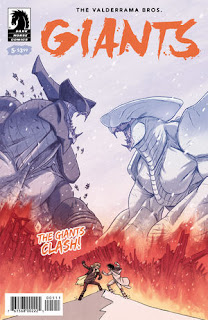 Giants comes to a conclusion with this dramatic fifth issue, wrapping up what has been a sensational American debut for writer/artists Carlos and Miguel Valderrama. Gogi and Zedo used to be brothers; now they are on opposite sides of a fight for supremacy, while two massive giant monsters challenge one another overhead.

This is a tremendous climax, working to perfection on both a visual level and an emotional one. It is testament to the Valderramas' talents that the issue feels simultaneously epic and intimate. The stakes and life and death, yet when all is said and done it's ultimately just two boys having a pitched fist-fight.

There has been a strong Katsuhiro Otomo influence over this miniseries, notably within the art, but across this issue there is a huge sense of Akira about things. It's destructive and cataclysmic, but above all there are two young men who used to be so close but who are now irreperably torn apart. It's hugely effective, visually dramatic stuff. This has been an exceptional miniseries, and I cannot wait to see what the Valderramas bring to the page next. (5/5)

Under the cut: reviews of The Crow: Memento Mori, Descender, and Superman.

This Italian take on James O'Barr's The Crow continues in its second issue. The strengths and weakness remain much the same. Visually it's a beautiful book, and once collected together should make an attractive addition to the canon of The Crow. Broken into these shorter segments, with such a low panel-per-page count, there simply is not enough going on each month to make the comic feel like value for money - particularly with space taken up each issue for a back-up strip. This month's - tying into Poe's The Raven - is a striking and beautiful work. This seems like a book to keep an eye on, rather than one to pursue on an issue-by-issue basis. (3/5)

Hell has broken loose as robots rise up and slaughter their human masters across countless star systems. The sense of apocalyptic climax continues throughout this issue. Telsa is face with a choice: hand Tim-21 over to her father and maybe save civilization, or protect Tim instead. The present narrative and the recent flashback collide here, as Tim himself faces a choice. This is an exceptionally rewarding issue for long-term readers, packed with action and a simply enormous sense of scale. The slow build is paying off as the story reaches what feels like an end-of-everything climax. (5/5)

With DC's Superman books changing hands and getting shaken up, it's time for Tomasi and Gleason's run on the titular book to come to a close. It's a neatly written little epilogue that literally packs up the house and tidies everything away. For casual readers it's probably not worth reading, but for those who stuck through the whole Tomasi/Gleason run it's a very satisfying and warm-hearted conclusion. These are guys who really do 'get' Superman, and who have done wonders developing Jonathan Kent into the new Superboy. (4/5)
Posted by Grant at 1:27 PM