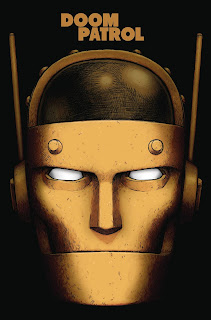 Gerard Way's relaunch of Doom Patrol has had a fairly shaky start due to repeated delays: so much so that the entire book is getting temporarily shelved after next month's issue to give it enough time to recommence on a more regular schedule. These sorts of delays can really hurt a book's chances: it makes them a little more difficult to follow from issue to issue, and often kill any of the story momentum.

That is certainly the case here, since Way's deliberate pastiche of Grant Morrison's iconic Doom Patrol run employs a lot of surrealism and deliberately weird segues, and that is the sort of thing that already makes a book a little more difficult to follow. Add in the delays and it's a big of a mess for the average reader.

Nick Derington's artwork is appealing and well-suited to the material, but sadly that material still feels too locked-in to Morrison's run. The old familiar characters are returning one by one, and it continues to feel more like an enthused fan work that a proper advancement of the series. It's fun, and silly, and enjoyable enough, but it could be a lot more beyond. (3/5)

Under the cut: reviews of Batgirl, Black Road, Descender and Ghostbusters 101.

I am genuinely impressed at how much this book has improved following its first rather lacklustre story arc. Here Batgirl continues to investigate a range of criminal operations based around social media apps, while dating the man who may actually be behind it all: Ethan Cobblepot, estranged son of the Penguin. The tone is strong, with a good hook into its extended cast of characters, and Chris Wildgoose and Jon Lam's artwork is distinctive and pleasantly cartoony. The book still feels a little by-the-numbers, but it is definitely improving. (3/5)

This issue is dominated by a sword fight between a deliberately beaten and tortured Magnus and the arrogant leader of the Christian compound into which he has infiltrated. It's well written and illustrated, and rich in character. The concentration of the whole issue into such a singular brief exchange is usually something I would find slightly annoying, but here it is weighty enough to succeed and pushes the story forward well. I am loving Garry Brown's artwork on this series: rough, emotive and bleak. Dave McCaig's colours really enhance that last quality. (4/5)

It really bears noting just how much of Descender's weird, dream-like quality stems from Dustin Nguyen's water colour artwork. He is deliberately vague about background details, and in the hands of a different artist with a penchant for fine detail and intricate images this would feel like a completely different story. The bottom line is that this is a series very much about characters, and the artwork really accentuates that focus. It's all in this issue too, with each of the various plot threads getting shoved further along as a crisis looms on the horizon. (4/5)

With IDW already publishing Ghostbusters comic books for some years now, and with Sony rebooting the franchise last year with an all-female cast, it was inevitable that sooner or later IDW was going to get the 1984 and 2016 teams to meet face-to-face. While that meeting does not happen in this first issue, we do get a lot of set-up and some genuinely entertaining material around it. Erik Burnham has a really strong handle on the characters, and the dialogue sparkles throughout. This is a media tie-in book done right. (4/5)
Posted by Grant at 1:46 PM