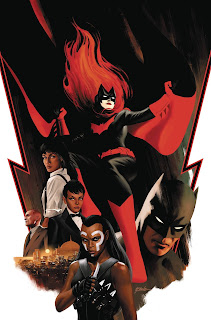 After a fairly underwhelming prologue issue, Batwoman hits the ground running in its first issue. Kate Kane is travelling the world on the hunt for an illegal serum that transforms normal humans into terrifying monsters. Accompanying her on her travels is Julia Pennyworth, daughter of Alfred. It is a nice set-up that keeps the strong angle on female characters that made the last volume of Batwoman work so well.

Steve Epting's artwork is great, but the real star is colourist Jeromy Cox. His stark monochrome work in the issue's flashback sequence really makes it stand out. Exceptional artwork and Batwoman feel like they go hand in hand, due in no small part to J.H. Williams III's outstanding work some years back. The work here is different of course, and nowhere near as intricate, but it looks wonderful and adds a great deal to the book.

Batwoman is a great character. She is tied to Batman enough to benefit from the extended Batman characters and situations, but she is very much her own character as well. In many respects she is the Black Widow of the DC Universe: a talented espionage agent haunted by a violent past. She even has the red hair. It's another solid win for DC Rebirth. (4/5)

Aquaman and Mera team up with the US Navy's shape-shifting team known as the Aquamarines, in order to track down and defeat the monstrous creature known as Dead Water. This is a solid issue, but it never rises above solid: there is action in spades, and the Aquamarines get fleshed out a little, but there is not much else beyond that to really make the issue stand out. Dead Water doesn't quite work as a villain either, which makes it a little difficult for it to have sufficient impact. (3/5)

In this penultimate issue of "I Am Bane", Bane fights his way through Arkham Asylum for one final showdown with Batman. For fans of Batman's rogues gallery it's something of a delight, with brief appearances by both famous adversaries and obscure C-list villains. On the other hand, this entire arc has just felt a little too slow, with too much portent and not enough actual action. An awful lot is riding on the final issue in two weeks to make the arc feel worthwhile. (3/5)

Roy Harper and Oliver Queen are back together again, with no shortage of recriminations or arguments, as Queen Industries attempts to force an oil pipeline through Native American land. Interspersed with the present-day action are a series of flashbacks showing off how the two fell out in the first place. To an extent I think long-running comics need to reiterate their back stories from time to time to let new readers in on it all, but for an older reader like me there's a repetitiveness to this kind of story that makes it a little dull to read. Like many of the other books this week, it's a solid issue but not a great one. (3/5)
Posted by Grant at 8:58 AM