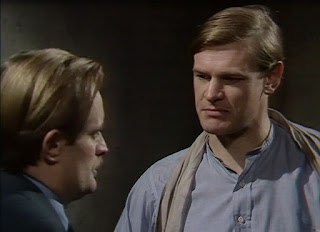 The Germans bring in a new British prisoner: Pilot Officer Lawrence Page (Ian McCullough). He keeps to himself. He shies away from discussing his past. When another officer gets frustrated and threatens him, Page almost gouges his eye out. Suspicions are raised that Page may not be a British officer at all. Meanwhile Carter (David McCallum) tries to establish a coded communications line with British Intelligence back in London.

Some of the best episodes of Colditz have focused their stories on single guest stars, allowing the series to showcase particular events or personalities without having to worry about how to ensure that character survives or copes intact to appear in later episodes. "Tweedledum", for example, was pretty much the strongest episode in the first series, because by using a guest character it was free to take his story to its logical conclusion without having to pull its punches. Something very similar happens here with Pilot Office Lawrence Page.

The episode, which was written by Arden Winch, undertakes a masterful piece of misdirection. Carter has agreed to help the French prisoners by establishing a secret communications link to Whitehall via coded letters to his wife. The information that could then be exchanged could potentially identify a chain of French resistance cells all the way to the English Channel and enable much better success among escaping prisoners once out of the castle. It is critical work, and enormously dangerous: should the Germans realise there is a code and decipher it, the entire French Resistance could be decimated.

In comes Officer Page, broody and resentful, evasive about his background and betraying a distinct lack of knowledge about the British Air Force. The immediate assumption is that he is a German plant or spy. He is a spy, but not in the way Carter and the other officers think: Page (not his real name) is a British secret agent. He is emotionally broken by the war. If recognised as a spy he will be interrogated, tortured and executed. Colditz turns out to be the safest place for him to quietly sit out the war - but when Carter identifies him and Whitehall learn of his survival, he is thrown to the front of the queue to attempt an escape.

Carter cannot tell anybody who Page really is, and cannot explain to the other British officer why Page is allowed to leapfrog them all to escape first. It turns into an intolerable situation: nobody likes Page, nobody trusts him, London is agitating for him to leave first, while Page is desperately to stay right where he is.

At the centre of the episode is a sterling performance by guest star Ian McCullough, best known for his role as Greg Price in the BBC's post-apocalyptic drama Survivors. Given that series' producer Terence Dudley also directed this episode of Colditz, one wonders if perhaps this was the performance that scored McCullough the job. This is a fantastic hour of television.
Posted by Grant at 9:00 AM