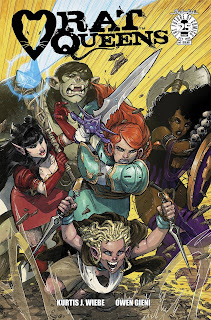 Rat Queens seemed to be one of Image's very best and most entertaining comics. Then its artist quit the book after an incident of domestic abuse. Then the replacement quit after only a few issues. Then the second replacement left under an acrimonious cloud, claiming that the original artist was coming back. Then the book got cancelled, pretty much on a massive cliffhanger.

Now it is back, keeping its creator and writer Kurtis J. Wiebe but introducing a fourth regular artist: Owen Gieni. It also pretty much ignores the cliffhanger ending of the first volume and simply jumps ahead to effectively reboot the entire story. It is back to basics here, with a group of badly behaved violent women essentially playing out the plot of every Dungeons & Dragons game with a greater-than-usual serve of sex, drugs and rock'n'roll.

Gieni's artwork has a nice storybook quality to it. The characters all look the same, but the aesthetic is distinct from earlier versions by Upchurch or Fowler. Wiebe's sense of humour remains intact as well, although the book's second half gets a bit too parodic for my taste. It does not hit the creative heights that the original volume did, but we're only on issue 1 at this stage. I'm happy to give the book the chance to sink back into the swing of things. It's a great set of characters, and I'm pleased to see them return. (3/5)

Under the cut: reviews of Cosmic Scoundrels, Doctor Who: The 11th Doctor, Extremity, Giant Days and Green Arrow.

Love Savage and Roshambo are two space pirates in this ridiculously silly science fiction comedy. It has a nicely loose art style by Andy Suriano, along with some vivid colouring, but at the same time it is a rather slight work. It is low on both plot and panels, making it an unfortunately quick read. Still, it has a sense of whimsy to it and fans of comics like Tank Girl might find some appeal here. For me there was just a little too little for the price on the cover. (2/5)

I adored the second volume of Titan's 11th Doctor comic book, but I'm sadly not feeling the same sense of unbridled fannish excitement reading this third volume. In this issue, the Doctor and Alice are stuck with the Sapling: an alien child fused together from each of their memories combined. A trip back to London for Alice to recover leads to a weird time-space phenomenon, time-travelling armies, and the Silence. There's something very ordinary about it all. Simon Fraser's artwork is enjoyable enough, but Alex Paknadel's script feels weirdly reheated - there have been a lot of time anomalies over the course of this series - and not very clearly expressed. (2/5)

In a strange science fantasy world, a one-handed orphan named Thea seeks revenge on the Paznina that destroyed her home and murdered her mother. This is a violent revenge story, packed with action but also a lot of really nice touches of cultural detail. Johnson's artwork has more than a shade of Katsuhiro Otomo about it as well, and it is nicely coloured by Mike Spencer. It could almost work as a self-contained short story, but the story continues beyond this: I'm intrigued to see where it goes. (4/5)

Susan's cold gets even worse, forcing her friends to take drastic action: calling her father. There's a simply wonderful blend of comedy and tragedy in this issue of Giant Days, packed into a story that is rich in character and readily identifiable to anyone that has been a 20 year-old university student desperately seeking some independence. This is always one of the most charming comics of any given month, but just occasionally the Giant Days team hit every beat so crisply and so effectively that they produce something that's genuinely great. This is one of those months. (5/5)

"The Return of Roy Harper" kicks off this week, as Green Arrow's former sidekick crosses paths with his mentor after a long absence. This feels like the perfect kind of set-up for a Green Arrow comic: there's a Native American reservation protesting an oil pipeline set to run across their land, and both Arsenal and Green Arrow have arrived to lend a hand. Contemporary politics and social justice are this book's most comfortable element. After a solid opening, including some nice flashbacks to Roy and Ollie first meeting, it sets up the new story arc nicely. New artist Eleonora Carlini has a nicely detailed style. (4/5)
Posted by Grant at 5:02 PM