Star Trek: The Next Generation: "Tapestry" 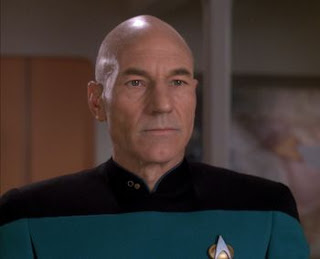 It is 15 February 1993, and time for another episode of Star Trek: The Next Generation.

When an away mission goes disastrously wrong, Captain Picard (Patrick Stewart) dies in the Enterprise sickbay. When he awakes it is in an afterlife controlled by the alien entity Q (John De Lancie), who offers Picard the chance to re-live a critical moment in his life all over again.

Q returns to torment Picard for the second time in one season - and only a week, in broadcast terms, after harassing Benjamin Sisko over in Star Trek: Deep Space Nine. It runs a terrible risk of over-using the character, since a little bit of Q tends to go a long way and also because his earlier 1992/93 appearances in "True Q" and "Q-Less" were hardly high quality outings. Thankfully "Tapestry" is a much, much stronger episode. It is probably the single-best Q episode Star Trek ever had.

The episode essentially echoes Frank Capra's iconic film drama It's a Wonderful Life, in which a depressed man gets the chance to see how much worse his town would be without him in it. Here Picard dies because an energy blast to the chest overloads his prosthetic heart, and Q offers to take him back to the days between his graduation from Starfleet Academy and his first starship appointment. It was there that he was stabbed through the chest in a bar fight with some aliens; avoid the fight, and he will not get killed in the present.

It is a set-up that creates wonderful opportunities. Firstly it allows the viewer to see what Jean-Luc Picard was like as a young man, and it turns out he is a cocky, arrogant womaniser. The episode essentially employs the same narrative technique used in fellow early 1990s science fiction drama Quantum Leap: the Picard of middle-age is living in the body of his younger self. We see Patrick Stewart playing the young Jean-Luc, with all of the characters around him seeing his younger self. His sudden change in behaviour - from reckless to cautious, impulsive to considered - causes an immediate change in his friends. Corey (Ned Vaughn) bristles at his former partner-in-crime getting cold feet at misbehaviour. Marta (J.C. Brandy) suddenly finds herself attracted to Jean-Luc's seemingly new-found maturity.

While Picard does successfully avoid getting stabbed the second time around, it creates a ripple effect through the rest of his life. He wakes up on the Enterprise, no longer fatally wounded, but without the life experience that drove him to the captain's chair he finds himself an unambitious junior-grade lieutenant reporting to Lt La Forge (LeVar Burton). It's a second great opportunity for the episode, showcasing not only a wonderful 'what-if' scenario, but also giving a brief glimpse into how the other senior officers on the Enterprise treat the subordinates.

This is an episode filled with nice scenes and ideas, but it's greatest strength is actually the relationship between Q and Picard. They have been interacting for six years now, and while Q has consistently put the Enterprise in peril and frustrated Picard at every turn, there is a weird sort of rueful affection going on. In one early scene Picard leans back in a bar and explains to Q his youth and who his friends were, and it honestly feels like one old friend talking to another. There is a great chemistry running between De Lancie and Stewart that just accentuates their scenes together.

At the episode's end Picard recovers, of course, and remains unsure of whether Q actually intervened or if he simply dreamed the whole exercise. It is a nice uncertain conclusion to one of this season's strongest hours. It is the 10th good episode out of 15, bringing Season 6's quality ratio up to 67 per cent.
Posted by Grant at 9:06 AM