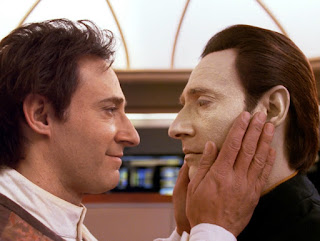 It is 22 February 1993, and time for another episode of Star Trek: The Next Generation.

While the Enterprise is docked at the space station Deep Space Nine, Worf (Michael Dorn) is presented with claims that his presumed-dead father may actually be alive and living on a Romulan penal colony. Meanwhile Commander Data (Brent Spiner) is hit by a strange energy discharge when assisting the station's medical officer Dr Julian Bashir (Alexander Siddig), leading to a series of unexplained hallucinations.

"Birthright" presents yet another unexpected two-part serial for The Next Generation. Only a few episodes after "Chain of Command" the series is at it again; only this time the results are much less successful. While Worf's search for his missing father stretches over the two episodes, the side-plot of Data learning how to dream is run through and complete by the end of the first hour. It creates a slightly off-kilter rhythm to the story.

This first half feels unbalanced in itself. Worf's decision to go looking for his father and the Romulan colony takes most of the episode to come about, leaving precious little time on the colony itself before the episode ends. At the same time Data's subplot feels constricted and rushed. A little more of Worf's adventure and less of Data's would have made a huge difference.

Of the two narratives, Data's is the most interesting and by far the most entertaining. The idea that his creator Dr Soong had inserted special subroutines to enabling dreaming is a good one, as is the idea that they are specifically designed to only be triggered at a certain level of neurological development. It is also rather wonderful to see the Next Generation cast interact with Bashir from Deep Space Nine. His wide-eyed enthusiasm at interacting with Data is not only accurate to his character, it is remarkably warm and good-natured. In the early episodes of his own series, Bashir struggled somewhat to avoid coming across as a little cocky and unlikable. His personality is absolutely nailed here, and Siddig and Spiner do some really nice work.

Worf's storyline is far less satisfactory. The series always runs a risk with Worf when he is challenged to do something deadly serious or dangerous, and doesn't have a better humoured character against which he can be contrasted. In this case the entire thread feels rather dour and unpleasant. James Cromwell makes one of several Star Trek guest appearances here as the information trader Jaglom Shrek, who brings Worf news of his father. It is a pity he is not as well used as he could have been.

There is a nice thematic parallel between the two narratives: both focus on sons and absent fathers, although in Data's case it is about connecting with Dr Soong on another level and for Worf it is about potentially reuniting with him if he truly is alive. It is altogether a reasonably enjoyable, if slightly shaky, episode. It gives Season 6 11 good episodes so far out of a total of 16. The quality ratio rises to 69 per cent.
Posted by Grant at 5:28 PM