Star Trek: The Next Generation: "Face of the Enemy" 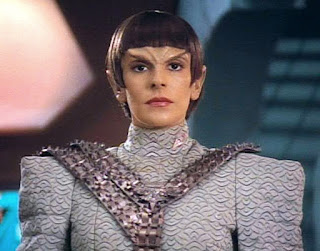 It is 8 February 1993, and time for another episode of Star Trek: The Next Generation.

Deanna Troi (Marina Sirtis) wakes up on a Romulan warbird. Her face has been surgically altered to resemble a Romulan, and an officer named N'Vek (Scott MacDonald) reveals she has been kidnapped in order to assist in a top secret mission for Spock's underground unification group. While Troi works to hide the truth from the ship;s suspicious commander (Carolyn Seymour), the Enterprise collects a Romulan defector that may hold vital information for Troi's mission.

Troi rarely gets to be the focus of an episode, and when she does it is usually pretty poorly developed. "Face of the Enemy", then, presents a sharp contrast. It is a fantastic espionage thriller that uses Troi's talent and experience effectively and inventively. It also provides a nice central conflict between two female characters, with Carolyn Seymour giving a great turn as Commander Toreth.

Seymour has appeared as a Romulan Commander before, in "Contagion", but as the writers room assumed that character would have died a new identity was created. She gives the character a great sense of authority and arrogance, as she boldly challenges Troi - whom she believes to be a member of Romulus' "Tal Shiar" intelligence agency - over her actions and orders. It is a shame the franchise never thought or managed to bring the character back, as she has all of the elements for a great recurring antagonist.

She is also an excellent foil for Marina Sirtis to work against. Sirtis is given great material here, as Troi shifts from blind panic to fear and ultimately to aggressively taking over N'Vek's entire mission to complete it on her own terms. Her empathic abilities are put to good use, as are her often-underwritten skills as a Lieutenant Commander in Starfleet. There is a pretty good argument to be made that this is Troi's finest episode.

It also great to see the long-running Romulan story arc continue. It is a fairly subtle arc, one that kicked off in Season 3 and is gently revisited each time the series returns to the Romulan Empire. here we learn that Spock's mission continues, and has now progressed to smuggling high-profile Romulan defectors out of the Empire. It is a shame that the arc effectively died off with The Next Generation: it would have been good to see it continue through Deep Space Nine and even the motion pictures (Star Trek: Nemesis weirdly ignores almost all developments on Romulus from The Next Generation).

If there is an area that lets the episode down, it is the production values. The Romulan Warbird sets feel very slightly cheap and unconvincing, as if they were cobbled together out of what little was available. They also feel very brightly lit: some darker lighting and better colour tones would have made things much more atmospheric - and correspondingly more dramatic.

There are two firsts for this episode. It introduces the Tal Shiar, the Romulan Empire's widely feared secret intelligence outfit. They will return again, particularly over in Star Trek: Deep Space Nine. We also get to see the debut of Worf's new hair-style: the slightly silly bob haircut replaced by a loosely tied ponytail. It is a much better look for the character, and is retained throughout all of Worf's future appearances in The Next Generation, Deep Space Nine and the feature films.

"Face of the Enemy" is a strong thriller, with shades of The Hunt for Red October and some great lead performances. This is the ninth good episode of the season, out of 14 so far. That brings the quality ratio up to 64 per cent.
Posted by Grant at 6:08 PM