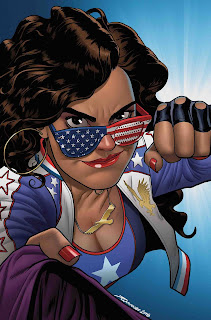 America Chavez has been a hugely entertaining Marvel Comics character without ever having an ongoing book to call her own. She was great in Gillen and McKelvie's Young Avengers, and more recently has since been leading the superhero team The Ultimates. This month she takes the spotlight for herself in her very first solo series: America.

I was really keen to like this book, because I love the character and want to see her succeed. Sadly this first issue at least really failed to work for me. It sees America break up with her girlfriend, take a break from fighting with the Ultimates, and enrolling to study at Sotomayor University. It is an oddly grounded and personal sort of story with a little bit of inventive panel designs and layout and a healthy dose of light-hearted banter.

I simply could not pull together much enthusiasm for this book. To an extent it may be a case of it simply not being aimed at me or readers like me. The artwork is solid, but Gabby Rivera's script is all over the place. There is very little holding the narrative together. It starts in another dimension, concludes back in the past, and spends a lot of time in the middle wasting that time. I want a great Miss America book. This isn't it. (2/5)

Under the cut: reviews of Aquaman, Batman and Doctor Strange.

Aquaman struggles to contain and befriend Warhead before the United States military storm in to take the mysterious cyborg down by force. This is a weirdly abrupt end to the "Warhead" story arc, however it does end in a manner that suggests the character will be around for a little while. There's something underwhelming about this whole issue. It does resolve the story, but in a very interesting way. The art and writing is competent, but strangely ordinary. Abnett, Eaton and Faucher have done better. I suspect they'll do better again. In between this issue honestly sort of sits there. (2/5)

Bane: the honest truth is that I have simply never felt it. The character was created to be the ultimate Batman villain, the one who could outthink him and ultimately destroy him. Don't get me wrong - he's nowhere near as dull and tedious as Hush - but there's something uninspiring about Bane to my mind. That doesn't help this current "I Am Bane" storyline, which is hyping him up as the villain to end all villains. Despite some very clever flashbacks running Batman and Bane's lives in parallel, this issue does not have enough drama and momentum to fully work for me. (3/5)

The very best superhero comic writers take the characters available to them, examine them from every possible angle of powers, personality and back story, and find unexpected and clever new stories to match. Jason Aaron achieves this feat here: sure Stephen Strange is the world's most skilled sorcerer, but he also remains an immensely talented surgeon. At the same time the current identity of Thor is Jane Foster, an immensely talented doctor. Basing an issue around both of them saving the world in surgery is just the cleverest thing. (4/5)
Posted by Grant at 7:48 AM