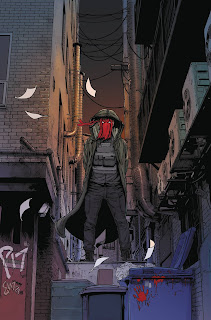 Last week saw the release of issue #2 of The Wild Storm, DC's relaunch of Jim Lee's popular 1990s Wildstorm Universe. A lot of the Wildstorm characters were inserted into DC proper back during the New 52, but The Wild Storm resets them all in their own world, and it makes a world of difference.

This is a smart, contemporary take on a superhero story, one without secret military organisations like SHIELD but rather Apple-style tech giants. This issue is low on action but high on dialogue and plot development, and the no-nonsense panel layouts and Jon Davis-Hunt's superb artwork make it an extremely clean, entertaining read. It is worth noting Steve Buccellato's emotive colours as well. As for the story, a young woman with an advanced tech-suit is now being tracked down by three separate organisations at the same time, with the strong sense that bad things are going to happen when those three groups collide.

For long-term Wildstorm fans it's great to see old characters reworked into a new form. For fresh readers this is just an intelligent and inventive new comic that is absolutely worth reading. Writer Warren Ellis is doing some great work here, and it deserves our attention. (5/5)

Under the cut: reviews of Daredevil, Divinity III: Escape from Gulag 396, Highlander: The American Dream, and Star Trek: Deviations.

The story of how Daredevil regained his secret identity continues with the return of Killgrave, the mind-controlling "Purple Man". While there's merit in the story, and a nice rough edge to Garney's artwork, this whole storyline is suffering by being told in narration by Matt Murdock - looking back on events months after they had occurred. It completely kills the suspense and weakens the issue generally. The result is a comic that could be really good, but instead feels like it is coasting along. (3/5)

Another tie-in to Valiant's high-profile miniseries finally reveals the Stalinverse fate of popular heroes Archer and Armstrong. It is a wonderful little one-shot, relocating the characters into a completely alien and unfamiliar context but then allowing them to reconnect and become the characters they were always going to be anyway. It's nicely illustrated by Portella with great colours by Dalhouse, but best of all it uses its length perfectly. It fits 20 pages and they're the only pages the story requires. (4/5)

In the lead-up to the Gathering, immortals Connor Macleod and Vazilek cooperate to bring down the psychopathic swordsman John Hooke. This issue in particular feels like a great adaptation of its source material. Mutti's art nicely reflects the appearance of Macleod, not to mention showcases a visually interesting look overall. Ruckley's script is Highlander through-and-through, with a back and forth narrative between the past and the present, and plenty of little references and mentions of the original film's events and supporting characters. If you're a fan of the movie, this really is worth checking out. (4/5)

In an alternate universe, Vulcan is a penal colony for the expanded Romulan Empire. Freedom fighter William Riker leads a team of rebels to rescue a particularly valuable - and familiar - prisoner. This is a passably entertaining comic book, released as a one-shot but clearly open-ended in case the readership like it. I'm not outrageously impressed. The story, once you move past the amusement of seeing post-apocalyptic versions of the characters, is fairly short and weak. Josh Woods' artwork struggles with some of the characters' poses, which can be a little distracting. I must admit to being a little frustrated by IDW's range of Star Trek comic books. They will publish series based on the current feature film franchise, and they will publish an anthology book, and alternate universe specials like this, but they seem incapable of simply grabbing one of the popular TV series - The Next Generation or Deep Space Nine, for example - and giving them a regular ongoing monthly. (2/5)
Posted by Grant at 9:29 AM