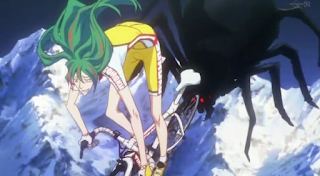 With the first club race complete, each new member is paired with a senior student to better develop their skills. Onoda is matched with Makashima, to improve his skills at climbing hills. Makashima's personal style, however, may be a little too distinct for Onoda to learn.

And, in fact, Makashima actively discourages Onoda from even trying. His nickname, "Peak Spider", comes from his bizarre weaving style of cycling uphill. After the overly lengthy serial of the club race, this episode is refreshingly self-contained. It is a nice continuation of the technical explanation of competitive racing, but that is balanced with a really enjoyable character piece.

It is rather sweet watching how Makashima and Onoda interact, each afraid of really talking with the other. For Onoda it's the fear of embarrassing himself in front of a senior class cyclist who seems particularly intimidating. For Makashima, it's simply an awkward way of relating with the world. He doesn't really feel comfortable talking, and buries himself in his cycling instead. Forcing the two characters together helps to establish a new relationship, and more importantly it fleshes out Makashima as a character.

He is easily the most visually distinctive character in Yowamushi Pedal to date, with his weird long green hair and red highlights, and his gangly, spider-like physique. Now he gets a personality to match it: blunt, awkward, and weirdly rather wonderful.

The episode also does a good job of emphasising the individuality of each rider. Onoda cannot copy Makashima's technique, no matter how hard and disastrously he tries, and instead of striving to finally make a breakthrough he is instead encouraged to find his own style. Each rider is different: the peak spider technique is perfect for Makashima's long limbs, but a strong cadence and consistent power continue to work best for Onoda. It's a nice little lesson that is carefully dropped in among the character work. This is a neat little episode: seven good episodes out of 10 gives the season a quality ratio of 70 per cent.
Posted by Grant at 7:53 AM