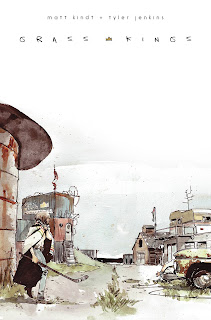 The Grass Kingdom is a small pocket of rural America that runs by its own rules, ignoring the Federal government in favour of independent, off-the-grid living. It is run by three brothers, including Sheriff Bruce - introduced escorting a young trespasser off their lands - and eldest brother Robert, who remains traumatised over the apparent drowning death of his daughter.

This is Grass Kings, a new monthly book by writer Matt Kindt and artist Tyler Jenkins. It is a very understated opening, easing the reader into the environment and characters without resorting to smash-and-grab action scenes or surprise cliffhangers. Kindt writes sparse, hugely effective dialogue too. Tyler Jenkins' artwork is beautiful, and similarly low key, and well served by Boom Studios' matt finish paper that really allows the delicate visuals to pop off the page.

If there's a problem it is that the book actually too low-key for its own good. It may ease the reader in gently, but it also lacks any proper sense of drama. There is nothing here to drag the reader back beyond the quality of the dialogue and the art, and in the hugely competitive world of American comic book publishing I am not certain if that will be enough. It is a soft opening, with a great deal to recommend, but it left me wanting just a little bit more than what I got. (3/5)

Under the cut: reviews of Copperhead, Doctor Aphra, and Planetoid: Praxis.

Jay Faerber's science fiction western returns after a long delay, with a fresh story arc and a brand new artist in the shape of Drew Moss. Moss jumps in with aplomb, with a strong visual style that's highly complementary to the artist he's replaced (Scott Godlewski, busy elsewhere but still providing cover art). In this issue the mayor has been murdered, and his replacement is the last person that Sheriff Clara Bronson could have expected. There's a wonderfully imaginative touch to this series, which broadly follows western genre tropes but still finds time to create some wonderfully unusual and charming aliens and settings. It's great to have it back. (4/5)

There is beautiful character work going on here, and Kieron Gillen continues to flesh out and expand upon his wonderfully amoral interplanetary archaeologist. In this issue Aphra and her monk-like father get pinned down by Imperial forces while searching an ancient Jedi citadel. It has great action, including a few highly inventive moments. It has some surprising plot developments and double-crosses. It has a wonderful line of humour running right through it. Perhaps most impressively, it perfectly captures the tone of the original Star Wars films without actually featuring a single character from those films. As was the case with Gillen's monthly Darth Vader book, this is a media tie-in comic done right. It's hard to imagine it being done better. (5/5)

Of all the things I was expecting from this second issue, another jump forward in time - in this case by another eight years - was not one of them. Here some teenagers sneak into an alien marketplace, while other human colonists investigate an unexpected new construction nearby. There is a great sense of world-building to this series that compensates for the choppy jump between issues. Even when I struggle to link the characters in the first issue to those in the second, there is plenty here to grab my attention and keep me interested. I suspect once the entire miniseries has been released, it will read much more smoothly as a collected edition. A few short strips thrown in at the back add a nice bit of value, and are very reminiscent of classic Moebius strips from the 1970s. (4/5)
Posted by Grant at 9:36 PM