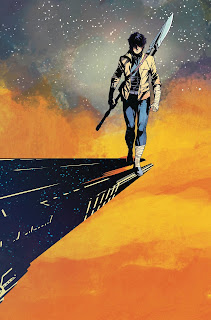 A few too many comics books came out last week, so we're off on a rare fourth instalment of The Pull List. Reviews of this week's comic will come along soon. let's start with Joyride.

After the pretty destructive events in issue #8 of Joyride, the book took a narrative jump forwards in issue #9 to show where the characters were a year later. Issue #10, released last week, focuses on love-struck teen Dewydd, now a walker-in-training on a mission to rescue his brother.

It is a smart and comfortable development for the character, rounding him off and giving him a greater strength and resolve. It is also great to see his relationship with his brother fleshed out. That all occurs within the framework of an inter-galactic prison break-in, with excellently devised aliens, technology and vehicles.

Marcus To does an excellent job with the art on this series, balancing the need to present realistic and sympathetic characters with wildly imaginative settings, aliens and planets. The book has consistently been wonderful to look at, and a large degree of its success comes down to his work. Irma Kniivila's colours complement the art beautifully. This is one of my favourite comic books at the moment: all science fiction fans should be reading it. (5/5)

Under the cut: reviews of Action Comics, Black Road, Descender, and Heathen.

Superman and Steel race to save Lana Lang, who appears to be dying of a mysterious ailment related to her recently developed super powers. Hank Henshaw leads an elite team into the former Superman's Fortress of Solitude. Lois Lane goes on a date with the alternate Clark Kent, in an attempt to work out exactly who he is. We've hit a point in Action Comics where it has become relatively impenetrable to new readers without a quick catch-up or a re-read of the last 20 issues or so. It's great stuff though, and represents a superb return to the continuity-heavy serials of the early 1990s that were Dan Jurgens' speciality. He has not lost his touch. (Note: the scene depicted on the cover does not happen in this issue.) (4/5)

Magnus and Kitta infiltrate Oakenfort's rebel Vatican, but the ex-slave assassin Julia is already there. This is a particularly strong issue, with a sense of tying the plot threads together and getting all of the characters into one place together. It has a very slick sort of Hollywood tone to it. Garry Brown's artwork is wonderful as well, and combined with Dave McCaig's limited colour palette it gives the whole book a hell of a lot to atmosphere and tension. (4/5)

Telsa and Quon have escaped the Machine Moon, unaware that the psychopathic Tim-22 has swapped places with Tim-21. On the other side of space, Driller Killer has a confession to make to Andy. As with Black Road above, this feels like a particularly strong issue. The story threads are advancing, and there is a real sense that the story is picking up towards a climax. Descender has such a unique look: most science fiction books tend to go for a lot of fine detail, whereas Dustin Nguyen's watercolours here tend to keep things looking very light and vague. It's a fascinating choice. (4/5)

Heathen follows a young Viking woman named Aydis who, after outing herself as a lesbian, has faken her own death and set off up a mountain to find the imprisoned valkyrie Brynhild. The book was already produced independently by Natasha Alterici, but now reaches a wider audience via the new publisher Vault. This is a strong opening chapter with distinctive and original artwork that really caught my eye. The one weird element is the costuming: the book is set on a snow-covered mountainside, yet Aydis wears a stock-standard pulp fantasy bikini. It is particularly odd because Alterici is not employing particularly cheesecake-like artwork, which usually accompanies that particular look (note the cover is not representative of the interior). It is a mild distraction in an otherwise excellent first issue. (4/5)
Posted by Grant at 10:09 AM