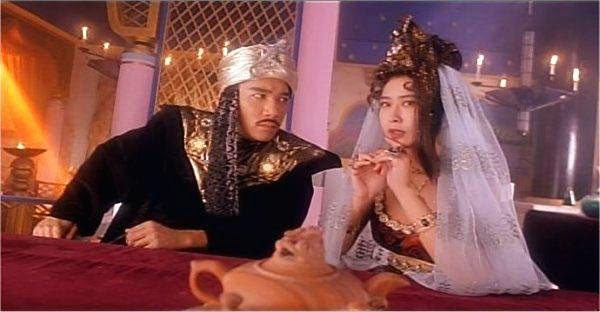 This is probably one of the strangest movies I am likely to ever see. It’s origins are strange, the film itself is strange – if there is an element of its production to be discussed, it is likely to turn out seeming strange.

In the early 1990s director Wong Kar-Wai was one of the big rising stars of the Hong Kong film industry. While his first two films – As Tears Go By and Days of Being Wild – had not been commercial successes, they had gathered significant critical acclaim. There was a sense that, given the right material and some time, Wong could produce a big box office hit. That hit was supposed to be The Eagle Shooting Heroes, an adaptation of the popular wuxia novel by Louis Cha. Wong, perversely, had other ideas. His adaptation took out almost everything that was in the novel except for its characters, and re-set them into a new prequel story that bore little relation to the source material. He shot it, with cinematographer Christopher Doyle, in an experimental and fairly avant-garde fashion. He edited the film in an unusual way that made it difficult for audiences to understand what was going on. He didn’t even keep the title, calling his film Ashes of Time.

Wong also took a long time to shoot the film. What was supposed to be a quick location shoot of a few weeks stretched into an intolerable stretch of months. The budget spiralled out of control. It spiralled so far, in fact, that to hide the growing cost of his film Wong produced a second film simultaneously, using the same actors and locations, to cover up the additional cost of Ashes of Time by claiming the costs for two productions instead of one. The end result is The Eagle Shooting Heroes.

Unlike Ashes of Time it actually shares the title of Louis Cha’s novel. It still is not an accurate adaptation, however: this time around the film is a direct parody, mocking the novel mercilessly through a combination of bawdy Carry On-style comedy and rough slapstick. The film was made on the cheap, since nearly all the money allocated to it was quietly siphoned off into Ashes of Time.

Despite the poor production values, there is a remarkably entertaining film here. It has that particularly Chinese style of comedy to it, which makes it a little difficult to engage with for some viewers, but once you’re tuned to its sense of humour it’s a breezy and enjoyable experience.

The film is at its most interesting when viewed against Ashes of Time itself. The latter film was by all accounts a fairly hellish experience for cast and crew, and there’s a strong sense of play to The Eagle Shooting Heroes – a feeling that the film existed, if for no other reason, for the cast to let off steam and muck about to ease the tension. Sammo Hung choreographed the action to both films – it’s ironic that, due to the deliberately blurred and messy way Wong and Doyle shot the action sequences in Ashes of Time, Hung’s work can be more easily seen and appreciated in the cheaply made parody.

The Eagle Shooting Heroes is a strange film. For the uninitiated, it’s likely to be something of an education. For the Hong Kong movie fan, it’s likely to be entertaining. For the Ashes of Time fan, it forms an essential piece of a large and challenging puzzle.

This review was originally published on the Eiga: Asian Cinema website.
Posted by Grant at 10:01 PM