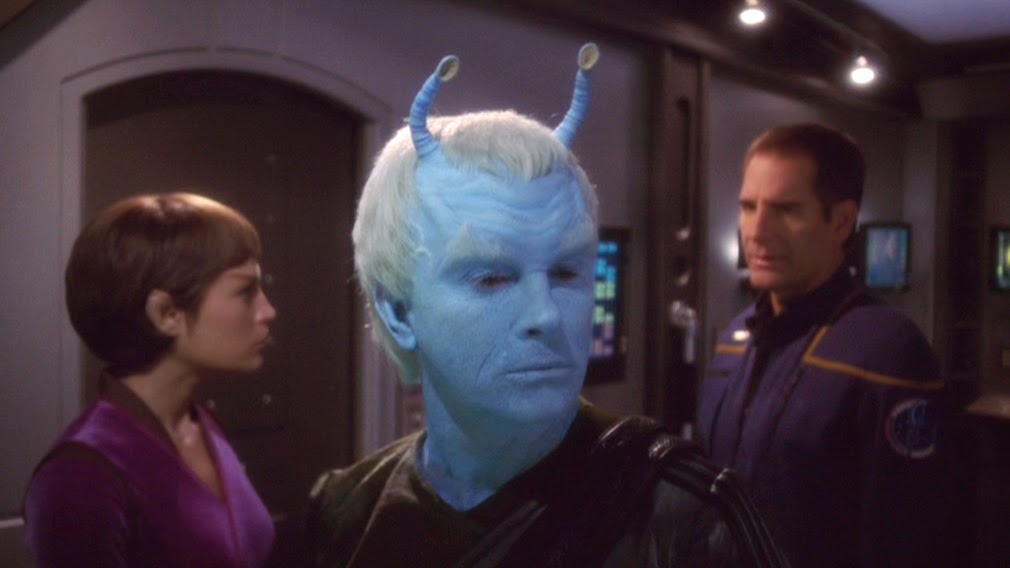 I think there's a general rule of thumb for Star Trek that any episode is automatically improved by the presence of Jeffrey Coombs. He lightened up several episodes of Deep Space Nine as the Dominion's obsequious servant Weyoun, and his multiple appearances as the Andorian Commander Shran certainly ensured some of Enterprise's best moments. I figured that, with the Enterprise deep inside the Delphic Expanse, there would be no place for Shran in the third season. I figured wrong. Just when the Enterprise is about to lose the trail on the Xindi superweapon, Shran's Andorian battle cruiser drops out of warp to help save the day.

I am genuinely impressed at how Enterprise picked up the Andorians, a famous but rarely used alien race from Star Trek history, and spun them into the series' most interesting recurring antagonists. Well, sort of antagonists. It's complicated, and this episode keeps it complicated, and I think that's part of why it works so well. Jeffrey Coombs is a stunning actor and a veteran of genre TV and film, and any scene he shares with Scott Bakula sparkles with energy.

We trust Shran and his crew, and then we're suspicious of them. Then we trust them again, and then we're suspicious. An excellent script keeps things taut and ambiguous as the Enterprise gets its chance to steal a prototype of the Xindi superweapon from under the Xindi's noses. It's probably the best script this season has had, which to be fair isn't saying much as the bulk of this season has been severely disappointing. It does stand up as one of the better episodes of Enterprise so far, however, and it is something of a relief to reach an episode that's actively enjoyable rather than middling or downright tedious to watch.

It's also a relief to see the ongoing Xindi arc get some energy back into it. We've had five episodes in a row of mission creep, so long that this episode required a lengthy clips package at its beginning just to get the viewers back up to speed. Once there, there's an urgency and a drive the series hasn't had in a long time. Hopefully the momentum will continue for the rest of the season.

One of the saddest things about Enterprise's cancellation after Season 4 was that there was serious consideration being given to adding Shran to the series' regular cast. He could have provided a much-needed injection of intrigue and drama and reinvigorated the show. C'est la vie.