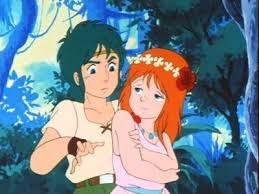 As I noted in my original review, I really don't feel there's enough to each individual episode of Genesis Climber Mospeada for to devote an entire post to each one. As a result I'll be reviewing this 1983 anime in groups of 3-5 episodes at a time, giving my overall impression of each episode and noting anything that strikes me as particularly significant.

Episode 2, "The Broken-Hearted Girl's March", introduces two new regular characters. The first, whose predicament gives the episode its title is the young girl Mint who is obsessed with marriage and runs around post-apocalyptic America in search of the perfect suitor. She's dreadfully irritating, and I remember even back watching this as part of Robotech I couldn't stand her. The second, the aloof Houquet (Rook in the Robotech version), doesn't get much more than a showy cameo. The episode's central plot, in which Bernard and Ray are lured into a trap in a human city, is much more interesting. It reveals that there are communities of humans happy to collaborate with the Inbit if it means being treated better. But oh, that Mint. So tedious and irritating. I wasn't enamoured with this one.

Episode #3, "Showdown Concert at High Noon", introduces Houquet properly, as well as Yellow Belmont - a freedom fighter against the Inbit who disguises himself as a female pop starlet. It's such a bizarre, out-of-left-field idea for a character that I can't help but admire it. Following the introduction of these characters in a bar room concert and brawl, we also meet Jim Austin: a Mars military deserter who joins the team when they rescue his friend from a rival street gang. I like that they took three episodes to introduce the lead cast, rather than throw them all on-screen at once. The result is a lot less confusing and allows each character to show their personality and merit (or lack thereof, in the case of Mint). Despite this, this actually episode felt a bit weak.

In "Survival Song Feeling" the newly assembled band of freedom fighters get separated from their base camp by an Inbit attack. It's a simple but neat little piece of suspense fiction, with the team having to work together to escape the Inbit pursuing them and get back to Yellow and their ship.

I particularly enjoyed episode #5, "Live Inn Scorched Earth Policy" - although even taking translation issues into account that's a damn weird title. This is a heist story, with Yellow Belmont distracting a town of Inbit sympathisers while Bernard, Ray and Houquet break into a military base to steal badly-needed fuel. The characters work really well together by this stage, and it's a neat little self-contained adventure.

So we're five episodes in, and by my account three of them have been pretty good: that's not bad for a cartoon from 1983. The quality ratio stands at 60%.
Posted by Grant at 11:52 AM