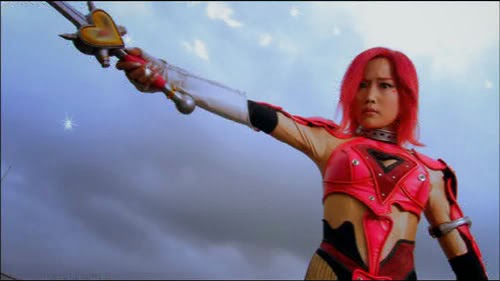 Many Western filmgoers bemoan Hollywood’s constant strip-mining of its audience’s youth, producing new adaptations of Saturday morning cartoons, classic TV shows and action figure lines. I suppose it’s a little reassuring that the same thing goes on in other countries and cultures as well. Cutie Honey is one of countless live-action remakes of a popular anime; in this case of Go Nagai’s 1970s hit TV series and manga of the same name (Nagai himself has a brief cameo in the film).

It does a serviceable job of retelling the origin story, and Cutie’s first battle against the villainous Panther Claw crime gang. It’s a non-stop hyper-active sort of a film, full of colour, movement and near-constant action. Any scene that doesn’t involve a vivid superhero fight seems to feature the lead actress lounging around in lingerie.

Director Hideaki Anno is best known for his animation work, particularly directing the Neon Genesis Evangelion TV series and films. Cutie Honey is his third live-action feature, and about as far from the serious character study of his previous works that you could get. Hiring an animation director for this film has definitely worked in its favour, since its visual aesthetic and pace owes far more to animation than it does to live-action cinema. The action sequences are boosted by hand-drawn animation effects, which not only reflect the film’s origins but also give it a fairly unique and colourful look.

In the title role is model Eriko Sato, who pretty much fulfils the requirements of the role – to be perky and pretty. This sounds like a criticism, and in a more complex film I suppose it would be, but as it stands Cutie Honey is deliberately campy and incredibly silly, so Sato does just fine. There is a slightly sleazy edge to the film, via the aforementioned lingerie scenes, but in an odd way this adds to the film’s vaguely inappropriate charms. Mikako Ichikawa and Jun Murakami do okay in supporting parts that exist almost entirely to service the plot – this is not a film for subtlety.

All of the underlying sleaziness does raise a pertinent question, however, which is: who on Earth is this film actually for? It’s inappropriate for children yet regularly too childish for adults. Between the Power Rangers-style fight sequences and the suggestive underwear it’s difficult to isolate the audience. Perverted adults? Children of inattentive parents? Who can say? Cutie Honey is by no stretch a perfect film, but as a wild and crazy insight into Japanese pop culture it is strangely addictive.
Posted by Grant at 11:16 PM