Doctor Who: "The Expedition" 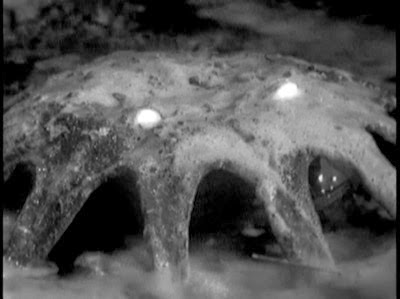 The Doctor, Ian, Susan and Barbara are trapped on Skaro until they can retrieve the TARDIS fluid link from the Dalek city. Their only hope of assistance lies in the peaceful Thals, who refuse to take arms and fight the Daleks - unless Ian can convince them otherwise.

There's something rather distasteful about the way the Doctor and his companions act in this episode. They need the Thals' help to retrieve the fluid link, and so despite the knowledge that many of the Thals will almost certainly die Ian goes out of his way to manipulate them into helping anyway. It's a far cry from how we think of the Doctor and his companions today: for them nothing is more important than escaping Skaro, even if it means driving innocent people to their deaths. It's well written and characterised, but it has to be said that it isn't Ian's finest hour.

Meanwhile the Daleks are using their purloined anti-radiation medicines to experiment on their own people, with fatal results. There's something deeply unsettling about a Dalek shrieking in pain and fear as the medication disorientates and then kills it, and its fellow Daleks simply watch on calmly and take notes. Their conclusion - that the medication is useless to them and their best chance to repopulate the planet is to detonate another neutron bomb - does not bode well.

In the episode's second half, Ian and Barbara join a Thal expedition to discover a rear entrance to the Dalek city. This means navigating a swamp full of mutated hungry creatures, which are remarkably well realised for a low-budget children's drama. One shot of a creature slowly rising out of the swamp is particularly effective.

This is another good episode, although I should add a caveat that I am deliberately watching these episodes out at a time with at least a few days in between each one. 1960s television drama is very slow by today's standards, and binge-viewing an entire serial at once often creates an impression that these old Doctor Who stories are dull and tedious. They're not - you just have to watch them correctly.