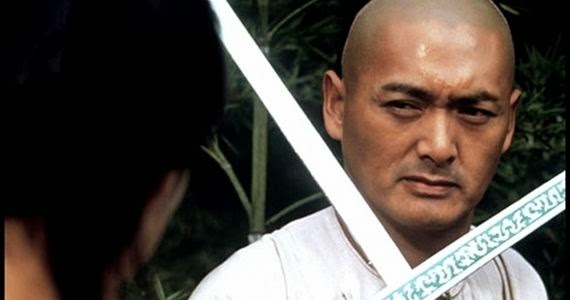 In 2000, Ang Lee’s Crouching Tiger Hidden Dragon exploded across international movie screens like a firecracker, winning numerous awards and widespread critical acclaim, and earning US$213 million in the process. For many viewers it was their first (and in most cases I suspect only) glimpse of wuxia cinema, that specifically Chinese genre combining historical fiction, fantasy, martial arts and super-heroic swordplay.

It's been almost 15 years since its release, and the film impresses just as much as it did the first time around. This isn’t simply a great film, and it isn’t even just the most creatively successful wuxia film of all time – Crouching Tiger Hidden Dragon is one of the all-time best films in the history of world cinema.

The film focuses on two separated couples: in one case they are separated by class and distance, in another by an overwhelming fear of rejection.

Zhang Ziyi and Chang Chen play the two young lovers. They’re confused and passionate. He’s a bandit chief who kidnapped her in the Gobi Desert. She’s a young aristocrat secretly trained to become a masked assassin. Circumstance is driving them apart, when all they seem to want to do is be together. The second couple is warrior monk Li Mu Bai (Chow Yun Fat) and the travelling swordswoman Yu Shu Lien (Michelle Yeoh). While Zhang Ziyi’s headstrong and conflicted Jen arguably remains the film’s protagonist, it is Chow and Yeoh who steal the film from underneath her. The unspoken, slightly awkward romance between these lifelong crime-fighters is effectively played and almost heartbreaking to watch. Their relationship gives the film a gently romantic tone.

The pairs are connected, however, through Li Mu Bai (Chow Yun Fat) and Jen (Zhang Ziyi). Jen is the secret apprentice of the notorious bandit Jade Fox – a bandit that Li Mu Bai has sworn to kill for murdering his former master.

It is tone that is the key to the film’s success: few films have been made where all members of the cast and crew have been so in synch with a single unified vision. The entire piece has a meditative, gentle quality that is sustained through scenes of romance, drama and all-out action.

The action sequences themselves are outstanding, using extensive wirework to give the stunts an ethereal, floating quality. There has never been a film that has captured the unearthy and supernatural feel of wuxia as effectively and with such iconic power as Crouching Tiger Hidden Dragon. It’s quite common to find a gripping action film – it’s a rare thing indeed to encounter one so beautiful. Also surprising is how effective the film is once you discover it’s based on the fourth novel of a five-novel sequence by author Wang Dulu. If no one told you, you wouldn’t guess.

A special note must be made of Tan Dun’s exceptional musical score, which combines a sweeping Hollywood-style set of melodies with traditional Chinese instruments.

Crouching Tiger is one of the most successful Asian films of all time, and deservedly so: as I stated at the top, this isn’t simply a classic wuxia film – it’s one of the greatest motion pictures ever made. From first scene to last (and what a last scene it is) it is absolutely unmissable and unbeatable.
Posted by Grant at 12:33 AM