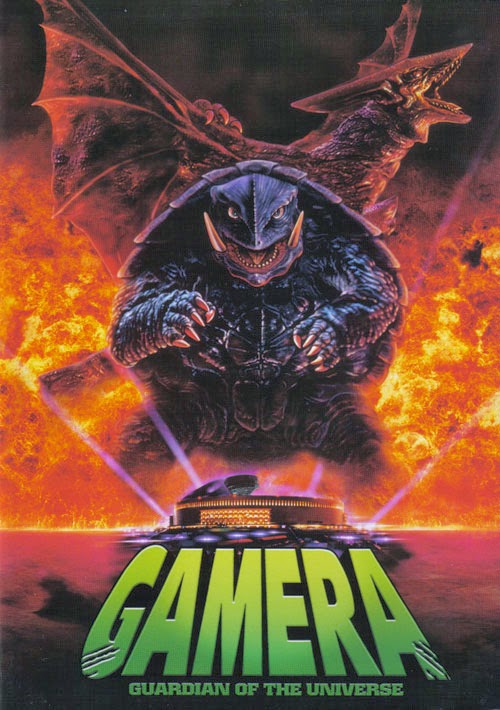 The giant monster movie, or “kaiju eiga”, is a peculiarly Japanese construction. It had its famous origins in the legendary 1954 classic Gojira (Godzilla), and a number of copycat and derivative works soon allowed the kaiju film to blossom into its own distinctive sub-genre. The most successful of these giant monsters – other than Gojira, of course – was Daiei’s Gamera. A monstrous flying turtle from outer space, the creature debuted in 1964 before starring in a string of successful pulp monster movies. In each of them, as is the tradition of this kind of film, Gamera was played by actors in large rubber suits crashing through a scale model city.

It’s possibly useful at this stage to note that the original Gamera was one of several monster movies featured on the American comedy series Mystery Science Theater 3000. The film, as is the genre, is seemingly ridiculous. It is filled with silly scripts, over-acting and frankly unconvincing models and visual effects. This is par for the course for its genre. Numerous filmmakers – particularly ones in the USA – have tried for years to somehow capture the concept of the giant monster yet produce a slicker, more contemporary version of it. Roland Emmerich famously failed to update Godzilla in 1998, and 10 years later Matt Reeves found great success with Cloverfield – although to make his film he needed to jettison most of the key elements of the genre in favour of contemporary horror movie tropes.

Given the inherent silliness of the kaiju eiga, and the fact that it’s most iconic elements – the rubber-suit monster, the model city, etc – are generally the ones most open to ridicule, it would be easy to assume that a straight-faced, genuinely good giant monster movie would be impossible to create. Then there is Gamera: Guardian of the Universe.

It was directed by Shusuke Kaneko in 1995 as a relaunch of the character. It follows the expected conventions of its genre: giant monsters converge on a Japanese city, and battle it out wearing rubber suits in a scale model reproduction. It should be as silly and kitsch as all of the other giant monster flicks. And yet it’s not. It’s genuinely good. It’s surprisingly good. The acting is not exceptional, but it is heartfelt and solid. The screenplay is relatively silly, yet it is presented with intelligent and dignity. The special effects are, while a visible cut above those seen in earlier decades, as strangely fake and obvious as they have always been – yet they are presented with such marvellous integrity that you simply don’t mind.

It is ultimately quick difficult to pin down the enormous appeal that Guardian of the Universe has. It essentially boils down to respect: this is the continuing of a noted Japanese movie genre, and it is not ashamed of that. Quite the contrary: it is proud of it. It’s a movie that lovers of the genre can hold up and celebrate, and it’s one that viewers new to the genre can experience without laughing at it. It’s as if the production team are leaning out of the screen, hand held out to take the viewer’s, a look in their eye that says ‘We know, but still…’ This movie is more fun that you will expect. It’s more fun than this genre would seem capable of. This isn’t just a movie to love, it’s a movie that demonstrates why we love movies.

This review originally appeared on the Eiga: Asian Cinema website.
Posted by Grant at 9:47 PM