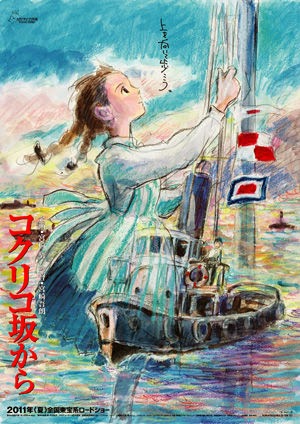 While Goro Miyazaki's difficult 2006 debut Tales from Earthsea may have led some to fear he did not share his father Hayao's talent for animated storytelling, his 2011 follow-up From Up on Poppy Hill should assuage most of those concerns. This grounded, sweet drama about a teenage girl in 1960s Yokohama is vastly superior, and sits quite comfortably among earlier Studio Ghibli productions such as Only Yesterday (1991) and Whisper of the Heart (1995). In many respects, it's the sort of film for which the word 'charming' could have been invented.

The film follows Umi Matsuzaki, a 16 year-old high schooler living in Yokohama. In her mother's absence she manages and cooks for the family boarding house in between her academic studies. Umi connects with the editor of the school's student newsletter,Shun Kazuma, and they grow closer while working to save the school's decrepit student clubhouse from demolition. Much more happens, that's probably a fair enough synopsis if you haven't seen the film yet.

Why Goro Miyazaki's second film succeeds where his first faltered is likely down to Poppy Hill's amiable, gentle screenplay. Unlike Earthsea it was co-written by his father, and the elder Miyazaki's fingerprints are all over it. There's an argument to be made that, as it features no fantastical or visually outlandish content, Poppy Hill could have been shot just as easily in live-action, and that as an animation it's a little redundant, but this argument ignores the immense subtlety and more importantly simplicity that the film gets as a result of the animated medium. Sure, it could have been made in live-action, but it wouldn't have been half as engaging or emotionally effective.

The backgrounds in this film are particularly beautiful, with judicious use of CGI to enhance the hand-drawn animation rather than supplant it. Key animation is, broadly speaking, very good, however there are a few uncharacteristic moments where the quality wavers - generally when a bunch of characters are singing together. It's a little off in those moments, which isn't something you usually see in a Ghibli film.

The English language dub is first-class. Unlike earlier English-language dubs, which were produced by Disney and Pixar, this one was produced by Frank Marshall and Kathleen Kennedy. It's just as good, and goes a long way to prove that English dubs aren't necessarily evil. Sarah Bolger is particularly strong as Umi.

The huge jump in quality from Earthsea to Poppy Hill gives me great hope for Goro Miyazaki's future. I'm keen to see how he progresses in the future, particularly if his father's widely publicised retirement holds (I'm doubtful). The elder Miyazaki might be moving on, but it looks like his legacy may be in safe hands.

This is the 100th film review on The Angriest. Thank you for reading.
Posted by Grant at 8:36 AM