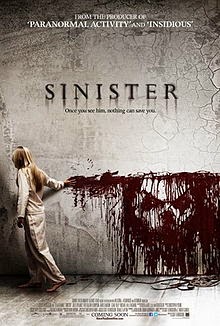 A struggling true crime writer (Ethan Hawke) moves into the house where a family was recently murdered, hoping that this unsolved case will provide him with a much-needed bestseller. In the attic of the house he finds an old film projector and a set of 8mm film reels. Each one depicts a similar brutal murder. Torn between informing the police and keeping the evidence to research the crime book of the century, he soon finds himself fearing that something supernatural is at work in his home.

Sinister is a horror movie written and directed by Scott Derrickson, whose 2005 thriller The Exorcism of Emily Rose impressed me a great deal. He also directed the remake of The Day the Earth Stood Still, which was fairly disappointing, so to be honest I wasn't entirely sure what to expect from him this time.

It's a film with a lot of nice creepy moments and unexpected jolts, but it's also a film that falls apart if you think about it for more than 30 seconds. It's basically disposable entertainment: enjoyable for the 110 minutes running time, but probably best forgotten about once the credits start rolling.

Ethan Hawke is great as Ellison Oswalt, a writer so desperate for another hit book that he's willing to put his entire family and his own life at risk in order to get it. His actions are believable, and Hawke does a good job playing a character with no belief in the supernatural having to come to terms with something very supernatural going on inside his own house.

Plotwise, the film struggles a little. It feels very reminiscent of a large number of different movies, as if Derrickson put his DVD collection into a blender and filmed the results. The collection of snuff films in the attic reminded me of Joel Schumacher's 8mm. Other parts felt like The Shining, or even Paranormal Activity (not a surprise: Paranormal Activity and Sinister share a producer).

The bottom line is that Sinister is a mostly effective and broadly entertaining horror film. It ends about a minute later than it should, and its ideas aren't necessarily the most original, but it does its job well enough. The question is: is 'well enough' good enough?
Posted by Grant at 9:15 AM