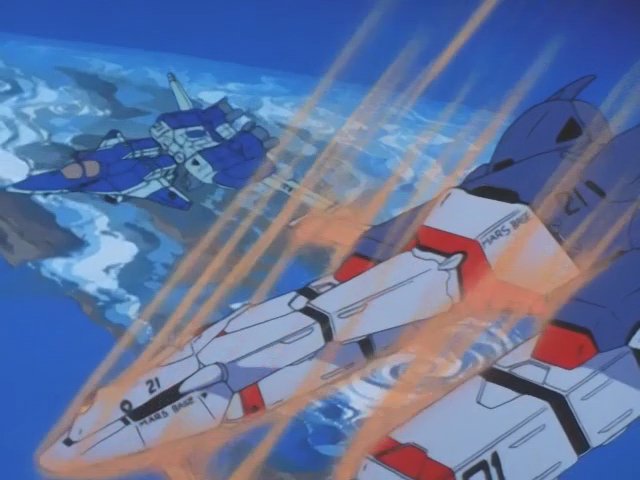 Genesis Climber Mospeada is not a title that may be immediately familiar, but for many anime fans it's actually one of the first series they ever watched - even if they didn't know it. In the mid-1980s producer Carl Macek attempted to distribute anime to American TV broadcasters, however he faced a problem in that the average Japanese series was only 26 episodes long and American broadcasters demanded at least 65 episodes: enough to 'strip' a series five days a week for 13 weeks. Macek's solution was to buy three different series, and chain them together into one Frankenstein narrative by mucking about during the translation and dubbing. The resulting series, Robotech, was a smash hit and remains a cult favourite, with most kids at the time not realising they were watching three series rather than one: Super Dimension Fortress Macross, Super Dimension Cavalry Southern Cross and, finally, Genesis Climber Mospeada. So if you've already seen the third arc of Robotech, in which Scott Bernard, Rook, Rand and their friends battle the Invid, then you've actually seen Mospeada pretty much intact save for the Robotech references in the dialogue.

I've recently been rewatching Mospeada, and while I certainly don't feel the urge to review each 25-minute episode at length I did feel it was worth covering the first episode in a bit of detail. All up, it's pretty much what you'd expect: a dated but entertaining science fiction series of aliens, grassroots rebellion and transforming robots.

Episode 1 provides an introduction to the world of Mospeada. The Earth is occupied by the alien Inbit (or Invid, if you're a Robotech kid), and a military expedition from the Mars colony is arriving in Earth's orbit to take the offensive to the Inbit's central hive known as "Reflex Point". It's a pretty devastating first episode: you're introduced to protagonist Stig (or Stick) Bernard and his crewmates, with the strong impression that you're about to watch another ensemble science fiction series like Macross, Orguss or Southern Cross. Suddenly that rug is whipped right up from underneath the viewers, as the Mars expedition is all but wiped out on the first offensive, leaving Stig somewhere in the North American wilderness to fight the Inbit on his own.

I love how brutal Japanese animation can get. You look at the sorts of stories we watched as kids in the 1980s - Ulysses 31, Starblazers, The Mysterious Cities of Gold, Robotech - and compare it to the stuff kids watch today and there's no comparison. The death toll just in this first episode is catastrophic: no sooner has Stig proposed to his girlfriend than she's already dead along with the rest of his ship's crew.

In terms of design, Mospeada has always been a favourite. I particularly adore the curved, insectoid look of the Inbit. They were always a favourite of mine as a child, even if they do aim like Stormtroopers and fold in a fight like a cheap card table.

There were a lot of giant robot anime flying around in the 1980s: Mospeada strikes me as one of the more original attempts, since it combines the giant robot (or 'mecha') genre with a sort of post-apocalyptic road movie narrative. Back when it was part of Robotech it was easily my favourite series of the three. Decades later, and I'm still find it pretty damned enjoyable. I'll keep watching, and give a few updates as I go.
Posted by Grant at 9:37 AM