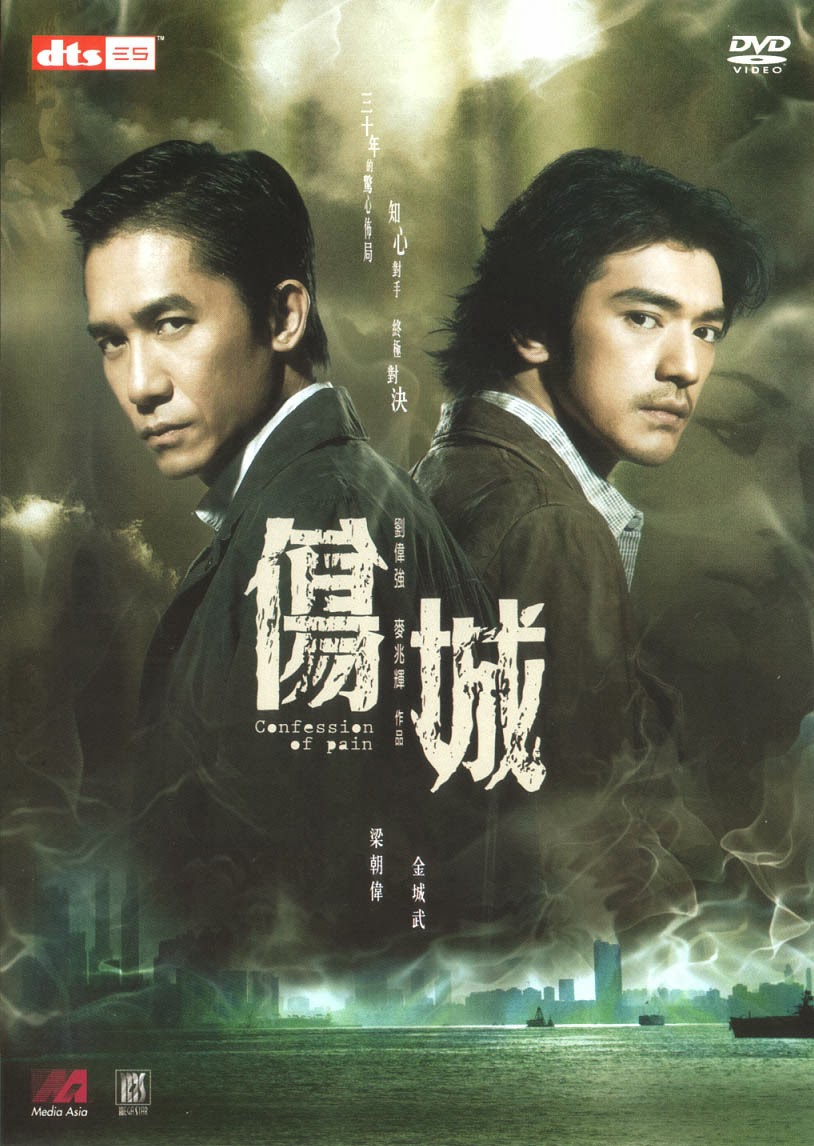 Felix Chong and Alan Mak are possibly Hong Kong’s best commercial screenwriters. They are the writing team behind the internationally acclaimed Infernal Affairs (remade in the USA as The Departed) as well as local hits Overheard, Initial D and Lady Cop and Papa Crook. In among that string of successful movies they also wrote this neat little police thriller.

Confession of Pain (its Chinese title translates literally as Forlorn City) is a gripping melodrama with a rare spin. It is, in essence, a murder mystery. The difference is that we know the identity of the killer within 20 minutes. The remaining 90 are spent finding out why the murder occurred, and whether or not the killer is going to get away with it.

Coming home after a sting operation, police officer Bong (the always appealing Takeshi Kaneshiro) finds his pregnant girlfriend dead from suicide. Three years later, Bong is now an alcoholic private investigator. He is dragged back into the life of his ex-partner Hei (the always excellent Tony Leung Chiu-Wai) when the father of Hei's wife Susan (Xu Jinglei) is murdered. While the police investigation is ongoing, Susan asks Bong to conduct his own investigation.

While not scaling the dramatic heights of Infernal Affairs or Overheard, Confession of Pain remains a gripping and effective thriller. It is certainly a melodramatic film, and those with an aversion to drama from the blunter end of the spectrum (as loved by the South Korean film industry) might consider giving this one a miss. Many elements - such as Bong's drunkenness - are rather over the top.

There is also a tendency in Hong Kong cinema to use female characters in a specific way, a tendency very much in effect here. Hollywood has an awful habit of using female characters as damsels in distress, or sex objects, or a prize for the male protagonist to win over in one fashion or another. Hong Kong cinema is somewhat different I think: all too often the female characters exist not as a reward but to provoke an emotional response in the males. Bong's personal arc can only be kicked into gear by the death of his girlfriend - her only purpose is to provoke the story. It’s a phenomenon well known to American comic book readers – they call it ‘women in refrigerators’ after a particular incident in a 1990s Green Lantern comic. The effect creates weak female characters, and I think the female characters are visibly quite weak here – although both Xu Jinglei and Shu Qi (as Bong's new girlfriend) give strong, likeable performances.

Despite some flaws, Confession of Pain remains another winning entry for writer Alan Mak and Felix Chong. Track it down before the Hollywood remake emerges from development hell.

This review was originally published on the Eiga: Asian Cinema website.
Posted by Grant at 9:42 AM