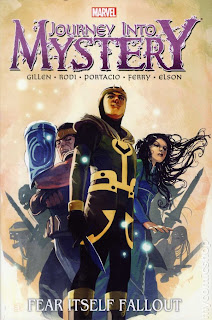 This comic feels like the Marvel Universe edging onto Neil Gaiman's territory. Writer Keiron Gillen has done amazing work here, particularly with his introduction of industrial Manchester Gods, a new pantheon of British mythology seemingly led by an immortal version of Factory Records founder Tony Wilson. Gillen's run is coming to an end, so really there's only going to be four books in total to buy to complete this series: that makes it compact, exceptional and very, very cool.

Batwoman is one comic that categorically didn't need a zero issue. For one thing it already had one in recent years. For another, there's nothing really interesting to be revealed in Kate Kane's backstory: Greg Rucka and J.H. Williams III did such a good job of telling her story that there's nothing left to tell. Instead we get a bit of character development, and perhaps a softening of Kate's fractious relationship with her father, all delivered via a retelling of her origin and the Elegy storyline from Detective Comics. It's readable and enjoyable, but entirely unnecessary. (3/5)

Mark Waid's seemingly effortless run on Daredevil continues. Foggy and Matt aren't speaking to each other. Matt's mentally unwell ex-wife has turned up at his apartment. Someone is making Matt question his own sanity. What I'm particularly loving about this run on Daredevil is how Waid is making something genuinely serialised. I don't feel like it's being written with one eye on the trade collection, and it's rewarding my continued reading with a story that is building and developing each issue, either in the spotlight or the background. (5/5)

Legion of Super-Heroes is in a similar pickle to Batwoman, because it wasn't that long ago that DC published the Legion of Super-Heroes: Secret Origins miniseries - and what of worth is there left for writer Paul Levitz to tell? Here we get a fairly humdrum early adventure for Braniac 5, set just before he officially joins the Legion. It's competently written, and reasonably drawn, but kind of boring. It's also done a hell of a job of killing any momentum generated in the comic over the past few months - a problems that's plagued quite a few New 52 titles this month. (2/5)

This series is hand-built for a Walking Dead-style cable TV adaptation. It's well written, atmospheric, engaging and creepy. Three issues in, and it's becoming clear that this is a title that's likely to stick around for the long haul. A mystery is forming, and a strong cast of characters is developing. I suspect in the long run this book is going to thrive more in trade paperback form than in the individual issues - the first collection is out in December, I think, so make an appointment if quality comic book horror is your thing. 15 years ago this book would have been a smash hit for DC Vertigo. Nowadays it's perfect for the new Image Comics instead. (5/5)

So this is the final instalment of the first-ever Marvel Universe/Ultimate Universe crossover. How much you've enjoyed it will likely depend on what you were looking for. It hasn't presented a particularly gripping or cohesive storyline. In fact, it felt like it barely had a plot. What it did have, and what I loved, was a wonderful exploration of character. It hit all the right emotional beats, and left itself upon to a sequel down the road. I'd be very happy to see an annual mini-series of this kind, particularly if it keeps the sharp-eyed handle on character that Bendis has. (5/5)

Jeez, DC: I know that this might sound odd coming from a hard-core male comic book nerd in his mid-30s, but could you please consider publishing a few DC Universe titles not aimed at hard-core male comic book nerds in their mid-30s? It's getting embarrassing. In this new book, the lead story reboots 1980s comic Amethyst: Princess of Gemworld in a new, grittier incarnation. The original was a fairly entertaining fantasy comic aimed at girls. This reworking (by Jem and the Holograms creator Christy Marx) feels a lot darker and more mean-spirited, including an attempted gang rape before the first issue is out. What makes this new version even stranger is that on television a series of animated shorts are pushing Amethyst in the exact opposite direction, pitching it younger and cuter than the original. A back-up serial reworking Beowulf into a post-apocalyptic environment is distracting but far too short to make an impact. I give this comic a year. (One final point: why bother giving your comic a generic name like Sword of Sorcery if your cover is going to include Amethyst in massive, colourful letters underneath it anyway? Why not just call the comic Amethyst? It's going to ride or fall on her storyline anyway.) (2/5)

While I have no doubt that the glacial pace of Bendis' comic books must drive some readers crazy, I love it for how much it opens his books up to depth of character. This issue seems largely devoted to moving the chess pieces in place for the next big plot development, but it still manages to be filled with significant moments and scenes all on its own. One oddity is how the book has been branded for the past two issues as being part of some colossal Ultimate Universe cross-over. This is the only Ultimate book I read, and I don't feel like I've missed a thing. Weird. (One significant note of criticism: Nick Fury, Iron Man and Thor do not appear in this comic book, other than on the cover. Seems a bit of a cheap stunt to convince readers otherwise.) (4/5)

Wonder Woman is one of the New 52 titles that doesn't feel like it's lost monentum due to Zero Month. Thankfully the first arc concluded with issue #12, so this one-shot feels like a palate cleanser, depicting an early adventure for the young Diana, still some years away from becoming Wonder Woman. Chiang's art is mostly excellent, although I didn't realise until Azzarello's dialogue told me that Diana was supposed to be 12 at the start of this comic: Chiang's art doesn't maker her look like she's 12. (4/5)

Winner of the Week: Spider-Men #5 was a great book for dialogue and character, so I'm going to go with that for this week.
Loser of the Week: Legion of Super-Heroes #0 was simply a dull, unnecessary book.
Posted by Grant at 12:00 PM