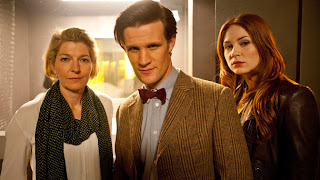 One day, millions of small black cubes appear on the planet Earth. No one knows where they came from, no one knows what they're for. Even the Doctor can't work out their purpose, leading to a year-long search for answers - and a year of living with the Ponds.

"The Power of Three" is an unexpected surprise; not because the episode is good (and it is), but because it's such an idiosyncratic episode of Doctor Who. For one thing, events take place over nearly a year. For another it has a bizarrely languid pace; even when the proverbial shit hits the fan it never feels as if the stakes are really as high as they seem. Instead the episode focuses quite tightly on emotion and character. I think I prefer it that way.

Despite the mysterious cube invasion, the episode is actually about Rory and Amy making a choice: should they continue travelling with the Doctor or actually break away and establish their own lives on Earth? This is without question the most well-considered departure of the Doctor's companions ever, taking its time, building things up, and reaching a resolution this coming weekend with "The Angels Take Manhattan". There's a beautiful scene midway through this episode of the Doctor and Amy sitting watching the Thames outside the Tower of London: it manages to cement and fully express their relationship in perfect fashion, and is wonderfully underplayed by Karen Gillan and Matt Smith. There's also a nice scene between the Doctor and Rory's dad Brian (the returning Mark Williams), where the Doctor is forced to admit that not all of his companions survive. It's a nice foreboding lead up to the next episode - I have to admit I'm becoming slightly fearful for the Ponds' safety.

The episode introduces a re-designed UNIT, now led by its scientific advisor Kate Stewart (Jemma Redgrave). I love UNIT, and I wish they'd appear more regularly - hopefully with the introduction of such a high profile guest character (the Brig's daughter!) we'll see them again later this season. Kate didn't seem to get quite enough development this time around - this should be rectified.

The actual invasion plot is rather lacklustre: there's only so much you can do with inert black cubes. That said, it's well thought out and original - that is, until the Emperor from Return of the Jedi pops out to ramble some technobabble at the audience. Thankfully with a focus on the regular characters it doesn't irritate too much.

I'm impressed by Chris Chibnall this year. I've previously been rather underwhelmed by his Doctor Who scripts ("42" and "The Hungry Earth" two-parter) and actively despise his two years as showrunner on Torchwood, but both "Dinosaurs on a Spaceship" and "The Power of Three" have been remarkably entertaining. What's more, they're quite different to each other. Given his impressive track record of writing for and producing British television, Chibnall would have to be on any shortlist to replace Steven Moffat as executive producer within the next year or two. If you'd asked me about the possibility of a Chibnall-led Doctor Who a year ago, I'd have been pessimistic. After his last two scripts, however, I think he'd possibly be rather good at the job.

Blimey, four enjoyable episodes in a row - whatever is the world coming to? Doctor Who Season 7 continues to be 100% worth your time.
Posted by Grant at 9:45 AM