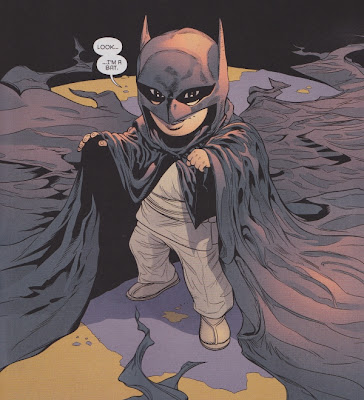 We're two weeks into DC Comics' celebratory "zero month", in which each DC Universe title has a special issue #0 that fills in backstory, or introduces a new character, or what have you.

What the first two weeks' worth has demonstrated, perhaps unfortunately for DC, is how much better they could have relaunched the DCU last September. A few too many of these zero issues feel like they should have been the first issues last year: Action Comics last week and particularly Batman this week.

As they've done it, the New 52 is a haphazard hodge-podge of new origin stories and unchanged status quos; it's just complicated enough to confuse new readers but also utterly confusing for old ones too. What's in continuity now? What isn't? How did Batman go through four Robins in five years? How did the entire backstory of Green Lantern even fit into the past five years? It's all been a bit messy, and while sales have been boosted and several key titles re-invigorated, my feeling 12 months in is that the DC Universe is in shoddier shape than it was before and a lot of once-in-a-generation opportunities got missed.

Anyway, under the cut I review this week's reading: Batman, Batman and Robin, Demon Knights, Frankenstein: Agent of SHADE, It Girl and the Atomics, The Manhattan Projects, The Massive and The Shade.

Another week in September, another set of DC New 52 "zero issues". This one is split in half, the first written by Scott Snyder and the second by heir-apparent James Tynion IV. It's actually the second half that's the most impressive, with Tynion using a relatively short page count to deliver a fantastic origin story for Tim Drake, Jason Todd, Barbara Gordon and Dick Grayson, all while ostensibly writing about the first time Commissioner Gordon turns on his bat-signal. It's outstanding, and as I've alluded to above it makes me wish that DC would have actually properly rebooted the DC Universe when they did. I would love to see a monthly comic slowly play out the first five years of Batman's career in this fashion. (5/5)

This origin issue basically tells the story of Damian Wayne from birth right up to his first encounter with his father. It's exceptionally well written and drawn, and fills in a valuable gap into the character's backstory. It also boasts the most adorable comic book panel of the year (up at the top of the page) as four year-old Damian discovers his father's old cowl among his mother's (Talia al Ghul) possessions. The cuteness makes a nice contrast to the rest of Damian's childhood, which is abusive and violent to say the least. (4/5)

In Demon Knights, Paul Cornell scripts another pretty excellent origin issue - this time detailing the binding of Etrigan the Demon to Jason Blood. It's a retcon (retro-active continuity) that flies somewhat in the face of what we've always believed the Demon's origin to be. Cleverly, he also manages to tie in all of the Arthurian characters that have been featuring in the last few issues. This is one retcon that works wonders and leaves the Demon - and Demon Knights - far richer as a result. (4/5)

On the other hand, Frankenstein's origin feels a little too much by the numbers. The constant narration emphasises the past-tense nature of this comic, and left me unengaged as a result. Sales on Frankenstein are not healthy, and I strongly suspect the character is living on borrowed time. That said, I've been really enjoying it, so when an issue comes along that wastes my time I get annoyed because I'm pretty sure there aren't going to be many more to come. (2/5)

It Girl and the Atomics #2

This second issue feels very much like the first: breezy, silver-age inspired superhero fun. It's not a taxing read, but it's a very enjoyable one that boasts great art and design and entertaining characters. I like the furry cosplay villains: the Hedgehog, the Ferret, et al. There's also something funny about It Girl and her pals protecting the city while Madman is away, given that this comic is being written and drawn by other people while Mike Allred is away relaunching Fantastic Four for Marvel. (3/5)

Hickman and Pitarra's mad, addictive story of 1940s evil scientists branches into new territory this issue, depicting what the Russians were doing while the American Manhattan Project was established. I've become completely addicted to this alternate universe evil science saga, and am absolutely hooked in for the long haul. There's a sense of mischief that permeates this comic. This will sound like I'm taking the piss, but I genuinely can't wait to find out which legendary 20th century scientist will be demonised into a fictional psychopath next. (5/5)

The Massive kicks off a new three-issue arc here, this time set in Somalia and featuring art by Garry Brown. It's a strange comic: full of great ideas and well-considered speculative fiction, yet emotionally as cold as an Antarctic winter. There's something about it - I think it's probably the deliberately matter-of-fact narration - that's keeping me at arm's length from the characters. Intellectually gripping while emotionally unengaging, which is not the best approach to sustain my attention. That said, Garry Brown's art is pretty nice. (3/5)

After 12 issues of his own total, and a truckload of appearances in Starman, the Shade finally gets his origin story - and to be honest it's a bit dull. Certainly I don't think we've gained anything by knowing the details that compensates for the loss to the character by having things explained. I have to go back and re-read this entire maxi-series, now that it's complete, because it felt rather bitty and uneven reading it month by month. (2/5)

Winner of the Week: I'm going to go with The Manhattan Projects, although fans of Tim Drake absolutely need to check out Batman.
Loser of the Week: It's actually a pretty strong week, with no Phantom Stranger-level clunkers. It's probably Frankenstein: Agent of Shade, which was just... missable.