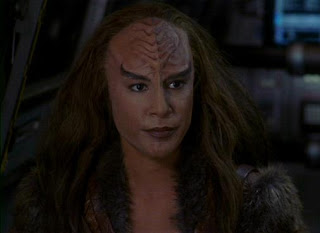 Before the Vulcans try to pull T'Pol from the Enterprise, she had this little adventure - trapped with Reed and Hoshi on a crippled Klingon starship that is gradually sinking into the atmosphere of a gas giant. They're too deep for the Enterprise to rescue them, they've got hours before the external pressures crush them like a tin can, and their shuttle pod has been stolen by the one conscious Klingon warrior left.

Okay, so I got them out of order - but in my defence I was just doing what the DVD menu told me to do. "Sleeping Dogs" is a nice little claustrophobic thriller with much to recommend and not a lot that's disappointing. It's not exceptional, it's not necessarily even memorable, but it's definitely an enjoyable hour of science fiction television.

For one thing, T'Pol and Hoshi actually share a scene. I'm not overwhelmingly obsessed with the Bechdel Test, in which two women must share a scene and talk about something other than a man, but I do find it's a useful metric when looking at how well or badly a TV series (or book, or film) is handling its female characters. Star Trek traditionally has a problem with representing women because generally it only bothers to have two at a time: Uhura and Chapel, Troi and Crusher, Dax and Kira, B'Elanna and Kes, and now T'Pol and Hoshi (admittedly Voyager has three, but as one of them is the Captain she kind of exists as an unofficial freebie to the "two women" rule - and the franchise had to pay it back with only one woman in the last movie anyway).

I wasn't a fan of how blandly the series pilot used the Klingons, but now that we've settled in we're getting a nice portrayal of early relations between humans and Klingons. Basically every time they meet the Klingons angrily threaten to kill the humans. It's a wonderfully antagonistic relationship that I can easily imagine settling down to the Cold War analogue of the original Star Trek episodes.

It's also nice to see another episode using basic physics as a basis for drama (in this case pressure threatening to collapse the Klingon ship) rather than oblique technobabble. It's one of the touches (like the earlier episode using air pressure between the Enterprise and an alien starship as a plot point) that does work to make Enterprise feel like an earlier phase in the Star Trek universe. They don't have issues with dilithium matrices or quantum polyphase fluxes. They have problems with air pressure and gravity, and aliens whose languages aren't programmed into universal translators yet.

Another surprisingly engaging episode. 10 good ones out of 14 - if you'd told me going into this exercise that I'd be finding more worthwhile episodes in Enterprise than Deep Space Nine, I'd think you were mad. But here we are. Enterprise is currently scoring 71%.
Posted by Grant at 2:33 PM