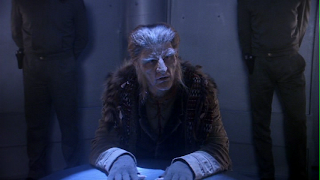 Babylon 4, which vanished into thin air several years earlier, suddenly reappears in a nearby sector to Babylon 5. When Sinclair leads a team to investigate and lead an evacuation, he finds a station about to get dragged thousands of years into the past - and a mysterious alien who wants it to happen.

"Babylon Squared" is a crucial episode for Babylon 5's developing story arc. I remember it being one of my favourite Season 1 episodes the first time around, and while a rewatch has lessened my appreciation of it a little bit, I think that loss of appreciation comes from having seen future episodes of the series rather than a fault in the episode itself.

The first time around the episode was a bizarre mystery, suggesting future events and cataclysmic disasters awaiting Sinclair. The second time around, and having seen the other end of this story (Season 3's "War Without End") it feels like Season 1 is accidentally stepping into Season 3 before backing away apologetically. The episode is all set-up with very little in the way of resolution - for now, at any rate. It is still a pretty impressive achievement: the first half of a time travel episode separated from the second by a gap of two years. I don't think there's been anything in SF television either before or since.

The episode also boasts some wonderfully moments between the regulars, such as Sinclair and Garibaldi playing pranks on Ivanova during breakfast and Garibaldi and Sinclair's surreal "button then zip or zip then button" conversation. It's completely out of place to the gravity of the rest of the episode, but makes the characters feel wonderfully human for a change.

I'm not sure if I've mentioned this yet or not. One of the things that's continued to strike me watching Season 1 a second time is how badly I misjudged Michael O'Hare the first time around. His performance as Jeffrey Sinclair is understated and measured where I used to think it was flat and wooden. He's a very thoughtful actor, and is adding a lot of depth to what is often a relatively thinly written role.

Of course they can't all be winners: guest star Kent Broadhurst is bizarrely over-the-top as Major Krantz, the Earth Alliance commander of Babylon 4. In an episode full of unexpectedly realistic performances from the regular cast he stands out like a sore thumb. More enjoyable is Tim Choate as the alien Zathras - he gives the character just enough tics and oddities to be strange but not irritating.

Meanwhile Delenn's personal story arc advances with a meeting with the mysterious Grey Council, and her receipt of the "triluminary". These episodes got broadcast out of order, which explains why she already had the triluminary a few episodes ago. Maybe she already had one, and is just being polite when receiving a second this week.

That's nine good episodes out of 20, or 45%. The season is really firming up after a shaky middle third.
Posted by Grant at 9:54 PM