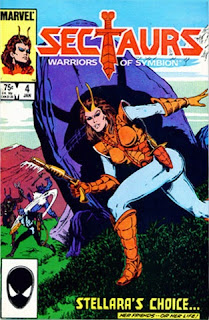 The 1980s were a big time for toy-based entertainment. The standard model of merchandising in the USA was turned on its head: instead of making toys out of TV and comic book characters, they started designing the toy line first and then adapted it to comic books and TV. It was trend kickstarted by Mattel, who figured that rather than spend the money licensing Conan the Barbarian they could make up their own characters and launch Masters of the Universe instead.

Coleco was a rival toy manufacturer who'd scored a massive hit with the Cabbage Patch Kids range of dolls. Looking for their next big success they eyed up the action figure marked that was cornered by the likes of Mattel's Masters of the Universe and Hasbro's G.I. Joe. Their new line? Sectaurs! They're fantasy warriors with a slight science fiction edge, much like MOTU, but they're all bugs. Humanoid bugs riding giant horse-sized bugs fighting evil humanoid bugs on the planet of the bugs.
Truth be told, it was a pretty cool line of toys - although no one but me seems to remember them. The rideable bugs (including a giant spider, which I know is not a bug) were actually elaborate glove puppets, so that kids could walk them along the floor while playing with the figures. They were released in 1985 with a loud fanfare, including a five-episode cartoon series and a monthly Marvel comic book.

The property sank like a stone. The toy range was cancelled within a year, the TV series never went past five episodes, and Marvel dropped the comic book after eight bi-monthly issues.

Issue #4 is dated January 1986. It is written by Bill Mantlo, who wrote all eight issues of the comic, with pencils by Steve Geiger and inks by Joe Del Beato, Mike Esposito, Steve Geiger, Mark McKenna, Pat Redding and Keith Williams. The editor was Dennis O'Neill.

This issue primarily follows Stellara, the one woman among the heroes, as she ascends a mountain to psychically connect and bond with a new mount for life. This left me wondering if James Cameron was a Sectaurs reader during the Aliens shoot, as pretty much exactly the same thing happens in Avatar. (Not really - I'm sure it's a coincidence.) Meanwhile the boys back down the mountainside struggle against not one, or two, but three rivals groups of enemies. Action ahoy!

This is a very old-fashioned comic, heavy on narration and explanation, with fairly portentous dialogue weighing down what should be a breezy, fun read. Then again, this is based on a range of toys. Story and character is less important than making sure your readers know who the characters are what their powers might be. It's a 24 page sales pitch in the form of a comic, not an entertaining comic in its own right.

I've been enjoying reading Sectaurs as a nostalgic trip back to my childhood, but please don't think it's a good comic. It was cancelled after eight issues for a reason.
Posted by Grant at 9:50 PM