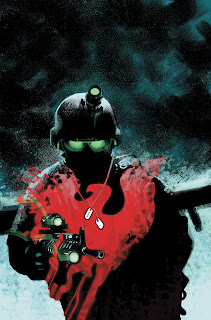 I haven't even flicked through a single issue of Men of War or G.I. Combat, so in this instalment I'm going to be talking entirely about sales - and those sales are pretty horrifying.

I do admire how DC experimented with a lot of different genres when they launched the New 52. They were all still essentially superhero adventures, but they got shone through the various lenses of westerns (All-Star Western), high fantasy (Demon Knights) and horror (I, Vampire). Men of War was an admirable attempt to kickstart the war comic, something which was extraordinarily popular "back in the day", but hasn't really been a popular genre of comic book for coming on... what, 30 years? 40, even?

Men of War launched a little shy of 34,000 copies. That's not a great opening bat, when you compare it to (using the above examples) almost 40,000 for All-Star Western or 38,000 for Demon Knights. In the great multi-genre experiment of September 2011, Men of War came out pretty low all things considered. It was, in fact, the lowest debut of every New 52 title bar OMAC, and about neck-and-neck with Static Shock. (Note all three titles have since been cancelled.) 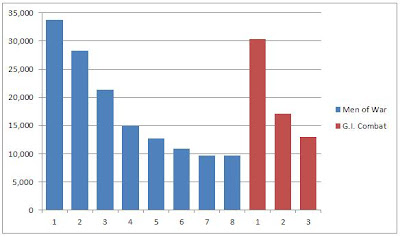 Sales dropped by about 16% with the second issue, and then another 24% with the third, and then another 30% by the fourth - at which point sales were about 44% of what they were at launch. By the time Men of War's 8th and final issue limped into comic stories it was selling less than 10,000 copies, or - to put it another way - it was getting outsold by Deja Thoris and the White Apes of Mars. To be honest, I'd be surprised if DC wasn't planning to cancel it after the sales came in for issue #2. Men of War was a sure thing by then, just not the sort of sure thing DC were hoping for. What continues to confuse me, however, is that after seeing the sales plummet from 34,000 in September to 9,700 in April, DC immediately replaced Men of War with G.I. Combat - another war comic.

I like that DC tried. They should be proud of the effort - but I also think they should stop trying now. It's getting embarrassing.
Posted by Grant at 6:42 PM