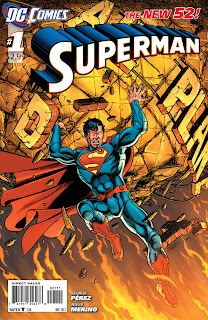 By all reason, Superman should be one of DC's highest-selling titles. It's the titular comic book for their most famous and oldest character, whose exploits over the decades have inspired cartoons, feature films and television shows. Despite this, DC have - in recent years at least - genuinely struggled to get Superman to sell. I think there's a problem with the character: he's difficult to write for, since his powers are so excessive and his personality is heavily grounded in the 1940s.

Their latest attempt to stimulate interest in the character has been to update his costume (no weight-lifting shorts any more, Kryptonian armour instead of a spandex super-suit), make him younger and remove his romantic entanglements with Lois Lane. It's been relatively dire, to be honest. Grant Morrison's take on this re-envisaged Superman has been working on and off, albeit more off than on, but the take seen here has been simply dreadful. Why does Superman need to be young and brash? Why does he have to wear armour? He's Superman; he is the armour. They've been cycling through creative teams and the artists involved have complained of excessive editorial interference. 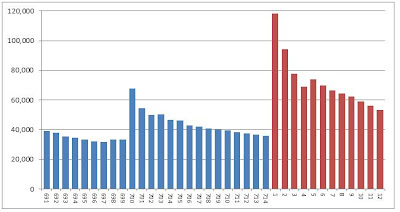 So what we have to the right are the last 24 issues of the pre-New 52 Superman along with the first 11 issues of the comic post-relaunch. It starts off relatively low for such a famous character (below 40,000), mainly because at that point Superman wasn't in his comic at all and had been replaced by Legion of Super-Heroes' Mon-El.

Things jump up at the celebratory issue #700, before dropping down gradually as readers started to abandon J. Michael Straczynski's "Grounded" storyline (which is fair enough, since Straczynski abandoned the storyline himself after only a few months).

With the New 52, Superman scores a massive hit: almost 120,000 copies sold of issue #1. Unfortunately, by issue #4 42% of those readers had abandoned the book. This is a pretty damaging drop: by comparison 4th issue sales dropped below the 1st by 29% for Batman, 24% for Wonder Woman, 26% for Green Lantern and only 19% for Aquaman. By issue #11 sales are still above 50,000 copies, but they're falling every month. Following Zero Month, DC will be attempting to revitalize interest in Superman by bringing in new writer Scott Lobdell and artist Kenneth Rockafort.