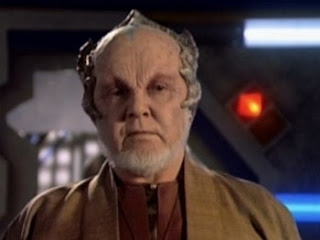 Seismic activity ripples across Epsilon III, the apparently dead planet around which Babylon 5 orbits. Attempts to investigate result in missile launches from beneath the planet's surface. Delenn receives a visit from Draal, her former mentor. Contact is lost with the Mars colony shortly before the Earth Alliance media announces that discontent on the human colony has broken down to open riots. Sinclair and Londo are both hallucinating a strange alien who begs them for help.

This is the first half of Babylon 5's first two-part story. I remember when I was a child, two-part stories seemed like an enormous occasion. They represented stories so large and momentous that one instalment couldn't contain them. Of course, with a show that's slowly becoming as serialised as Babylon 5 is, the idea of a dedicated two-parter seems a quaint novelty.

There's something very off about this episode. All of the actors seem vaguely disinterested, and most of their dialogue feels even more trite and cliched than usual. There are a few exceptions - Londo gets a wonderful short monologue comparing the Centauri-Narn conflict in terms of Newtonian physics - but on the whole this feels curiously flat even for Babylon 5. 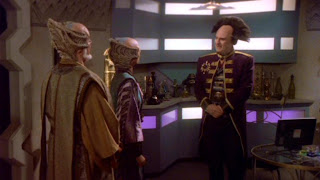 Thankfully the ideas are interesting. I remember the first time I watched this episode I was genuinely taken by the idea of a hidden base lost for thousands of years beneath the surface of Epsilon III. The planet is in the opening credits of every episode of the series, yet until this episode I hadn't given it a second thought. Also enjoyable is the scene of trade negotiations between Delenn and Londo - it feels like it's been quite a while since we've seen any proper diplomacy going on at this apparent centre of diplomacy.

Also interesting is the revolt on Mars. The series is set on Babylon 5: we don't get to see Mars. Everything we discover we learn second-hand, and that's an intriguing prospect. There's been a lovely narrative thread running through this season as the Earth Alliance government has become darker and more insidious. It's never over-taken the rest of the series. It's just been slowly building up in the background.

So the dialogue and acting is rough, but the actual content is pretty interesting. It's a bit of a trial, but ultimately I did enjoy this one. I'm keen to revisit what happens next, because I honestly can't remember what happens. Babylon 5's first season now has seven good episodes out of 18, giving it a score of 39%.
Posted by Grant at 10:19 AM