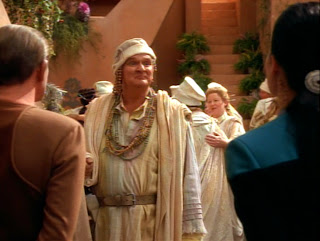 While exploring the Gamma Quadrant, Dax and Odo discover a strange emission of particles coming from a nearby planet. They scan for lifeforms and find none, but upon exploring they encounter an entire village of humanoid life forms who have been living there for a generation. Villagers have been disappearing - 22 so far - and Odo uses his detective skills to find out what is going on. What he and Dax discover is that the colony - and its people - are not remotely what they appear to be.

"Shadowplay" is a mixed bag, combining an intriguing A-plot with a deeply tedious B-plot. On the whole it's worth viewing, but I did find myself edging toward the fast-forward button every time the action shifted from Dax and Odo to Major Kira's love life back on the station.

So the A-plot: it turns out that the entire village is populated with holograms. This explains why no life forms were detected. A malfunctioning computer explains the missing people. The only questions remaining are why are the holograms are there and, once the system is shut off and repaired, should they be re-activated?


Kenneth Tobey plays Rurigan, the village's cantankerous leader. He's a bit of a gift to fans of classic science fiction, since he was the star of the 1951 classic The Thing from Another World. Mel Brooks veteran Kenneth Mars plays Colyus, the closest thing the village has to a police officer. Both actors give strong performances, as does Noley Thornton as Taya, a young girl whose mother is one of the villagers who disappeared.

Once again the mysterious "Dominion" get a namecheck - in this case it's because they destroyed Rurigan's home planet, which is certainly a vastly more threatening reference to the Dominion than we've heard before. Also of note, although it won't make sense until Season 3, is Taya telling Odo that "changelings" are a myth. This second one may have been deliberate foreshadowing or it may be a serenditipous reference in retrospect - either way it's effective in the long run.

This A-plot isn't overly dramatic or exceptional, but it's interesting and well played - which is more than can be said for the B-plot. Bajoran spiritual leader Vedek Bariel arrives on the station, and kindles a romance with Major Kira. This could have been more engaging if a more interesting actor played Bariel - Philip Anglim is fairly wooden and unconvincing - or if a more interesting character had been written in the first place. As it is it feels less like a storyline and more like a justification for paying salaries to the remainder of the Deep Space Nine cast this week.

All in all, this episode gets a tick of approval as a mostly entertaining diversion. That gives us 10 good episodes out of 16, or a rolling total of 63%.
Posted by Grant at 8:57 PM