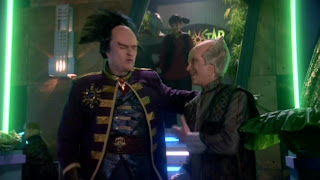 A convicted murderer is sentenced to "death of personality", in which his entire personality will be medically erased, so that he can spend the rest of his life making a productive contribution to society. Dr Franklin investigates a woman in Down Below (June Lockhart) who seems to have a magical healing machine. Ambassador Mollari and Lennier go night-clubbing.

It's the penultimate episode of Season 1, which means... to be honest, it seems to mean another throwaway episode. It feels like filler - something to keep the episode count up where Warner Bros wants it while Straczynski focuses on the episodes he actually wants to make. Let's go through the three plot threads in turn.

First of all, the murderer Mueller and his impending death of personality. It's quite a neat conceit, although horrifyingly inhumane. It's also very reminiscent of The Demolished Man by Alfred Bester (the author, not the Babylon 5 character named after him). The character is played perhaps a little too broadly by Mark Rolston, which is a shame - he's proven in things like The Shawshank Redemption that he's very good at playing these kinds of repellent characters. Here he seems just a bit too over-the-top and a little forced. Having seen him do much better in other roles, it leaves me wondering if it's the script (by Straczynski) or the direction (by Lorraine Senna Ferrara).

Talia gets a nice subplot where she has to scan Mueller's mind to enable a comparison once the procedure is complete. The full extent of Mueller's crimes becomes immediately apparent, but - as telepathic scans are inadmissable in court - there's nothing that can be done. I did like that legal aspect: while the broader strokes of Babylon 5 continue to irritate me, there's some genuinely considered attention to detail.

Dr Franklin investigates Dr Laura Rosen - whose name I kept mishearing as Laura Roslyn for the entire episode - who is operating an illegal medical clinic Down Below with a mysterious alien device. Rosen is played by Lost in Space alumni June Lockhart. She comes from a different generation of television, and sadly her performance does not keep up with the times. She feels painfully old fashioned, which a feeling not alleviated by the costume designer basically dressing her like someone's 20th century old aunt. The effect was curiously like Murder She Wrote's Jessica Fletcher turning up on the station without comment; it threw my suspension of disbelief entirely, and made Lockhart's entire appearance feel like a bit of stunt casting to get attention from sci-fi fans. (Which, let's be honest, it almost certainly was. The trick is to not make it feel that way when it is.) Despite numerous opportunities to do so, Lockhart never shares a scene with Bill Mumy, also a Lost in Space star who plays Lennier.

This is probably because Lennier is off on a gambling and drinking pub crawl with Londo Mollari, in a broadly played subplot designed to gather laughs. These laughs include Mollari using one of his six penises to cheat at poker, which is... unusual I suppose. It's almost certainly the only American SF drama to feature frank depictions of genitals. There's nothing necessarily bad about this subplot, in fact some parts are genuinely amusing. The problem comes when it's shoe-horned up against the main plot of a serial killer awaiting punishment. (And I'm pretty sure Straczynski meant "capital punishment" when the characters mention "corporal punishment" - unless Mueller was going to be spanked, of course.) Mixing comedy and drama is possible, but it's tricky to do with while avoiding unintended bathos. I don't think they pull it off here.