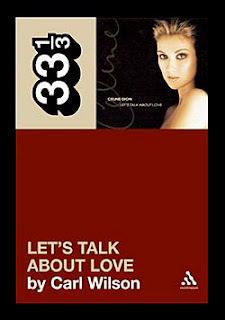 33 1/3 is an excellent range of short non-fiction books, each of which takes a classic or groundbreaking musical album and provides an in-depth critical analysis of it. Coming up in 2013 and 2014, for example, will be books on Devo, Sigur Ros, Bjork, Aphex Twin and Serge Gainsbourg.

I've recently read one of these books, albeit one with a big difference. American music critic Carl Wilson chose not to write a book on the Beastie Boys, or Johnny Cash, or Nirvana, or any number of acclaimed, artistically worthy albums. Instead he wrote one about a very different kind of an album: Celine Dion's Let's Talk About Love.

You heard me right: it's a non-fiction book about Celine Dion, and I'm giving it my wholehearted recommendation.

Before you run screaming from the room, let me reassure you: this slender volume is one of the best non-fiction books I have read this year. It's full title is Let's Talk About Love: A Journey to the End of Taste, and it's not so much a critical analysis of Dion's album so much as an intellectual exploration of why people like bad things.

The bulk of this book is about theories on popular culture, kitsch, sentimentality and shame. Not only is packed to the gills with relevant, thoughtful quotations from philosophers, other critics and cultural theorists, but it's also genuinely funny. In some respects it's a memoir of a hipster confronting his own critical bias, and overcoming the shame of listening to something that's popular, and overwhelmingly generic, and uncool.

I'd say that about 25% of the book is about Celine Dion, and her 1997 album Let's Talk About Love (you know the one - it had the song from Titanic on it), while the remaining 75% is an entertaining mixture of debate, academic theory and self-reflection. How do we form taste? How do we determine good from bad? Is there anything like objective taste, or is everything utterly subjective?

This book is funny, odd, thought-provoking, clever and immensely readable. It's a must-read for anyone interested in art, and how its audience relates to it. By the book's end I still wasn't a fan of Celine Dion, but I was a fan of Carl Wilson.
Posted by Grant at 9:25 PM