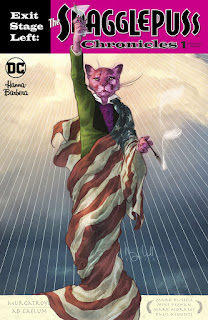 In recent years DC Comics has been publishing a number of comic books adapting old Hanna Barbera cartoons in interesting ways. Wacky Races via Mad Max. A post-apocalyptic Scooby Doo. A pointed and satirical remake of The Flintstones. By and large I have avoided these books, simply because I have never been that bit a fan of the Hanna Barbera back catalogue.

Exit Stage Left: The Snagglepuss Chronicles, however, grabbed my attention purely because it seemed just jaw-droppingly weird. Snagglepuss was a pink lion and aspiring actor who first appeared back in 1959 in an episode of Quickdraw McGraw. In this new comic miniseries written by Mark Russell, he has been re-imagined as a closeted gay playwright during the 1950s McCarthy hearings. It's also not really a comedy: it has a few jokes and gags, but nowhere near as many as you'd expect from the premise.

This book is just weird. It is weird that someone proposed it with a straight face, weird that a publisher would approve it, and weird that it was see release like this as if adapting a children's cartoon in an anti-communist LGBTI historical drama was a normal thing for DC comics to do. It's somewhat intriguing, and sometimes a little unsettling (the anthropomorphic animals looks bizarre without pants). Mainly, however, it's just really odd. (3/5)

Under the cut: reviews of Atomic Robo, Secret Weapons, Teen Titan, Superman, and Transformers vs Visionaries.

Atomic Robo: The Spectre of Tomorrow #3

Atomic Robo continues its odd new storyline combining secret android invasions with industrial zoning disputes. Its continued use of sharp, snappy dialogue and likeable characters makes me feel that this material would actually be better suited to animated series than a comic book; not that it isn't great in this format, it just feels even better suited to being a cartoon. Is Hollywood paying attention? I for one really hope that they are. In the meantime, Atomic Robo is some great science fiction comedy well worth reading. (4/5)

The best comic miniseries I read in 2017 gets a special prologue issue, set way before the events of the series. High schooler Nicki Finch is tempted into applying for the mysterious Harbinger program and their new method of 'psiot activation'. This is a tremendous and inventive one-shot, told in a series of single panel scenes - essentially one per day - as Nicki goes through the process of being activated, finding her secret power and beyond. Adam Pollina's art and David Baron's colours are great, making this 2018's first must-read issue. (5/5)

The future Tim Drake continues his attempt to murder Jonathan Kent before he kills millions in some half-formed future. The problem for Jon is that some of the Teen Titans are starting to appreciate Drake's point of view. This is a silly sort of romp, with multiple time-travellers, mid-story changes of costume and identity - the future Drake is called Savior now - and a breakneck pace. It's not classic DC storytelling, but it's fun enough and a step up from the somewhat substandard second instalment of this multi-title crossover. (3/5)

The silly action of Teen Titans continues straight into Superman, with part 4 of "Super Sons of Tomorrow". It really is just more of the same, albeit with a return for Superman himself and a much more open cliffhanger that really doesn't give away too much of what's going to happen in the fifth and final instalment. In parts Savior is giving me a pronounced Parallax vibe (the Zero Hour version, not the big yellow monster), which I'm a little concerned about. Still, with one part to go, this thing is either going to coast smoothly away or crash and burn. I hope for the former. (3/5)

It seems there isn't an old toy line Hasbro and IDW are not willing to exploit in their ever-expanding comic book universe. I'm honestly not sure how many people even remember Visionaries, let along played with the action figures: a set of fantasy characters with hologram stickers attached to their chests and shields. Now they're back in a Transformers crossover, which thanks to DC's Snagglepuss experiment isn't even the weirdest comic book idea of the week. It does not start well: I'm getting pretty weary of every IDW miniseries seeming to start with a "Previously" recap page, indicating that it isn't ever the beginning of anything. From there the issue is a perpetual bombardment of implied backstory, too many characters and a lot of silly names. The artwork, by Fico Ossio, is great, and it's very vibrantly coloured by David Garcia Cruz. Be prepared to work for the story. There's merit here, but it's mostly inside baseball. (3/5)
Posted by Grant at 7:36 PM