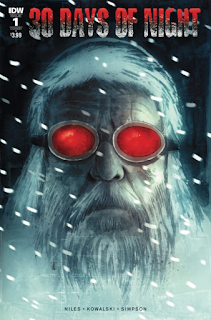 The original 30 Days of Night was a tremendous horror miniseries by Steve Niles and Ben Templesmith, one that worked off a great killer premise and was successful enough to get its own feature film adaptation. It's no surprise to see IDW revisiting the premise, which they do with this new series. What is a surprise is how they do it: effectively rebooting the series and re-telling it from the beginning.

It's a bizarre creative choice, given the quality of the original book. By any reasonable measure, this new first issue simply isn't anywhere near as good. It's difficult to emphasize just how important Ben Templesmith's artwork was to the original. It looked incredible, and was deeply atmospheric. This new version, with a much more traditional artist, simply looks like every other comic book.

Readers who have never sampled 30 Days of Night may enjoy this. Anyone looking to re-experience what attracted them in the first place will likely come away bitterly disappointed. (3/5)

Dan Abnett's richly developed and well-characterised undersea fantasy continues apace. I was a little concerned that, after six issues illustrated by the incredible Stepjan Sejic, the replacement artist would be a disappointment. I could not have been more wrong: Riccardo Federici's detailed, realistic artwork is absolutely jaw-dropping, and beautifully accentuated by Sunny Gho's similarly subtle colours. Combined with Abnett's strong writing, this has turned into a stunning run on the title and one of the DC books that is punching significantly above its weight. (5/5)

This new series from IDW's Black Crown imprint is going to get a fair whack of love immediately, thanks to the participation of comic book royalty Gilbert Hernandez. Dominic is an undergraduate student whose mother, a former professional killer, is forced to cut his school funding when she's called back into the business. Dominic returns home to life with an assassin, bringing his boyfriend Taylor along for the ride. It's a light, sweetly characterised book with a lot of potential. I'll certainly be checking out the second issue. (4/5)

Jeremiah spends his time in a bug-infested post-apocalyptic city with a mysterious but untrustworthy woman. His friend Soham has departed in a rage, and now communes unwillingly with the hive mind of the alien bugs. This book has evolved over the issues into a bleak, stylised masterpiece. It has such a wonderful distinct tone, and a very empty, wind-swept sort of loneliness infused right through it. I adore Bablet's art style: visibly French, but strikingly original too. (5/5)

Copperhead hasn't quite felt like itself over the last story arc. While individual issues varied in quality, it felt like the focus was a bit loose and fuzzy. With issue #17 the Copperhead of old appears to be back: strong, tight plotting, some twists and surprises, great character work defined via action, and really good art and colours by Moss and Riley. It's going to make this current arc really particularly well in a collected edition, and is bringing it towards a tremendous climax. For one thing, this is an issue that provides some well-earned and long-time-coming answers. (5/5)


Valiant. Written by Daniel Kibblesmith. Art and colours by Kano.

Another periodic relaunch from Valiant, this new edition of Quantum and Woody sees the titular brothers no longer of speaking terms - save for the one time per day they have to hit their magical bracelets together to avoid both being disintegrated. This new version by Daniel Kibblesmith retains the classic humour and narrative structure of the original book, which is a good thing: this has almost been something of an underrated gem. Some strong plot developments set the book off in a good direction with plenty of engaging story hooks. Readers looking for a new funny superhero book, this is your chance. (4/5)

First of all, this issue has pretty much the most glorious Star Wars-esque cover of any Star Wars comic I've seen of late. It just makes me all the more keen for Lucasfilm to greenlight a Doctor Aphra feature film now. Inside, Aphra continues her new life working under blackmail for the droid crime boss Triple-Zero. Meanwhile the Imperial officer Magna Tolvan awaits execution. This is the best of the Star Wars comics, because it has the freedom to play with the various toys of the Star Wars universe without being too badly hemmed in by the continuity of the films. Its script is packed with dark wit, and its art - while a little busy - has a nice aesthetic to it. (4/5)

Only a few weeks ago Detective Comics wrapped up a storyline in which a Tim Drake Batman from the future was attempting to murder Batwoman to save the world and change history. Now he has returned already, attempting to disable both Bruce Wayne and Superman in an attempt to kill someone else - Superman's own son Jonathan Kent, aka Superboy. It's a well enough plotted issue, and Jimenez's artwork is very appealing, but it does feel a bit like we already just did this storyline. The jump in intended victim seems bizarre as well. (3/5)

The future Tim Drake takes his assault to the Teen Titans, trapping them inside their own headquarters with a plan to kill Jonathan Kent right in front of them. This issue sees the slightly dubious storyline slide a little further downwards, with a fairly uninspired set-up and underwhelming pencils from Ryan Benjamin. It's readable, I guess, but simply not particularly interesting to read. A final page twist at least promises something worthwhile in the next issue, but that doesn't particularly improve things here. (2/5)
Posted by Grant at 10:45 AM