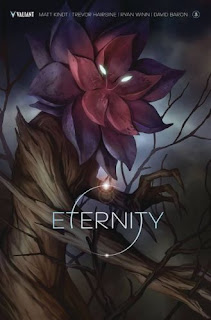 Divinity and Mishka have travelled to the Unknown in search of their kidnapped child, only to find alien prophecies and civil war preventing them from rescuing their son - and which may ultimately split them apart too.

Eternity is turning out to be an odd little miniseries, taking Divinity off the Earth after three successful storylines and throwing him into a crazy science fiction environment. At the issue's core there's a powerful dilemma. Assuming their captors are telling the truth, Divinity and Mishka's son is destined to keep the universe in balance. To achieve that task, they must abandon him and return home. If they continue with their rescue mission, while they may save their child they may also doom the universe. It's a perfect set-up to what should be a hugely emotional final issue next month.

Trevor Hairsine's artwork is good with nice slightly old-fashioned feel to it. The inks by Ryan Winn and Stefano Gaudiano work well. Once again, it's a solid miniseries from Valiant - the most underrated publisher in the business. (4/5)

Under the cut: reviews of Back to the Future: Tales from the Time Train, Batgirl and Usagi Yojimbo.

Back to the Future: Tales from the Time Train #1

There's a licensed comic for every property, and this month IDW have launched a new series spun out from the popular Back to the Future trilogy of films. Tales from the Time Train picks up where the films left off, with Doc Brown, his wife Clara and their two sons exploring history via a flying steam engine. Sadly that stupid train at the end of Part III is probably my least favourite part of the entire franchise, and this spin-off does not do much to change that opinion. Hardcore enthusiasts might find some entertainment value from it; sadly I did not. (2/5)

Harley Quinn descends upon Barbara Gordon's world in this short, sweet little Christmas themed one-shot. The light-hearted tone captures both leads wonderfully, while guest artist Sami Basari has a wonderfully clean style. It's nice to have regularly upbeat superhero books like this, and Ms Marvel over at the opposition company, that you can simply read and enjoy without having to drag yourself through grimdark trauma and excessive violence. Sometimes upbeat is exactly what you need. (4/5)

Part 3 of "Mouse Trap" sees Usagi and Ishida continue working the case of the missing silver, despite the demands of Ishida's superior for them to stop. Gang warfare reaches a peak too, with two rivals fighting it out for control of the Black Goblins. It's a great climax, although it's a little disappointing for the identity of the secret gang leader to remain a secret despite much teasing of the contrary. I've mentioned before, but I really like the longer and more serialised Usagi Yojimbo storylines - there's a lot more room to expand the plot and develop character. (4/5)
Posted by Grant at 9:47 PM